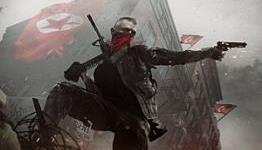 GamingLives takes a look at Homefront: The Revolution:

"Deep in the heart of Philadelphia – which the KPA has commandeered as their main base of operations – a small resistance is starting to grow in number. Players take control of Ethan Brady, an average man who joins the cause and helps plan a second uprising against his Korean overlords. Despite being outnumbered and out-gunned, Brady and pals aim to start a revolution and once again turn Philadelphia into the birthplace of American freedom. Rather than the linear action of before, Homefront: The Revolution takes place in a dystopian free-roaming city with plenty to do outside of your base missions."

Adhttps://store.steampowered.com/app/1488200/Symphony_of_War_The_Nephilim_Saga/?utm_source=n4g&utm_medium=native&utm_campaign=sow_n4g_native&utm_content=png
- Comments (0)+ Comments (0)
TopNewestOldest
The story is too old to be commented.
340°18

Homefront: The Revolution Is Currently $9 [AUD] and Here's Why You Should Buy It