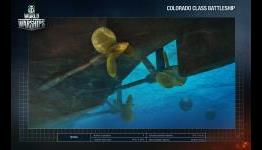 World of Warships and more explained in E3 Wargaming interview

We took the time to sit down during E3 2014 with Gareth Luke, Senior Producer of Wargaming. Luke offered some details about the upcoming World of Warships, as Wargaming turns to a different type of military battle. He was also able to answer some questions on World of Tanks, including the newly released iOS version. That version, World of Tanks Blitz, will look to be quick battles and use the touchscreen interface.

World Of Tanks Is Coming To Steam