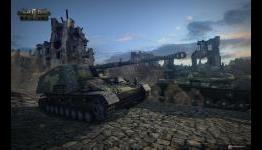 Wargaming has expanded its World of Tanks franchise now to three different platforms. This means a diverse demographic is aimed for by the same game. World of Tanks, as a whole and prior to the release of World of Tanks Blitz on iOS, has seen millions of downloads for its free-to-win style of gaming. At E3 2014, Senior Producer Gareth Luke was asked about how the each platform was geared towards its players. He agreed that each one was diverse, as the original PC version was aimed for a more hardcore, simulation based audience.

Bring this game to Xbox one. I stop playing it on the 360. But i really want it on the one. I try war thunder on ps4 and it sucks bad compared to wot.

World Of Tanks Is Coming To Steam