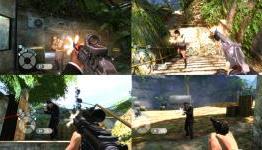 After an interesting WIRED! article on the importance of couch-play, Nerds on the Rocks pose the question on whether online gaming will ever truly replace the local experience.

Local! Or at least an option for both. I don't understand why couch coop is so elusive nowadays.

I'm actually considering getting another 42" tv and mounting it up right beside the other one at my girlfriends house just so we can play as a fireteam together in Destiny. I've got a 60" in the bedroom at my house and it pretty much takes up all the wall space, so that's not even an option there. Splitscreen would be a hassle free solution to all of this, I don't see why more developers don't give this option. With all the extra memory and performance in the new gen consoles there's no excuse, it should be a given.

On the back of gamecases. Why can't they just put Players: 1-2? That's all I want. To each their own and no offence, but I don't care about 24 players online. I care about the one sitting next to me that I don't get to play the game with. At least give us the option.

Exactly, I would have bought Destiny if it had local co-op, but oh well. Might as well skip it.

Don't get me wrong, I'm getting Destiny no matter what. After playing the Alpha it's my potential GOTY. I lost interest in eveything else after I got hands on with it. I just don't understand why they wouldn't give the option for splitscreen, especially since they've done it on games they've made in the past.

DA Inquisition is the only one that stands a chance against it (in my totally biased opinion), but that depends wholly on the battle mechanics, and I haven't got my hands on Inquisition yet. Usually I prefer swords and dragons over a FPS any time you ask me, but after playing it I was hooked like I haven't been in a good while.

Right now, as it stands, the Destiny beta will carry me until The Last of Us Remastered comes out. Then that'll carry me until Destiny comes out, then I'll play that until Dragon Age. If DA doesn't live up to the hype, then I'll keep playing Destiny until I find something that takes me over. Even then I've got a feeling that I'm gonna keep playing Destiny before, during, and after I play a bunch of other games. It's just one of those games.

Loss of one game won't bother me, I have a huge list of games to buy this year-

Couple those up with whatever PS+ hands out and it will be a very busy gaming year.

Infamous: First Light, that's another one I'm really anxious for. Garden Warfare looks good too, and I think that one actually has splitscreen.

I wasn't saying I'm not excited about other games, I was just talking about splitscreen and got side-tracked. I've got a solid list and I'm gonna get them all. I'm selective about the ones I actually like or want to replay though. I have particular tastes, but I'll try anything, that's how I've found some of the best games I've ever played. I'm not biased, I just have preferences. I like Trials Fusion a hell of alot more than I thought I would.

And Planetside 2 is free, so at least you can scratch that off your buy list :p

Yeah, I get that, it just sucks. I liked it better games were just games, before everything was a business model.

Couch coop could also draw attention to it from people who prefer splitscreen that might not've been interested otherwise. It's sad that local cooperative play is so rare right now that games could possibly use it as a selling point.

Split screen has always been important to me. I do play games often online, however split screen is sometimes the only way to play specific games if you dont have two of the same console. Tony Hawk Pro Skater had an amazing split screen. When i saw the hd version, i assumed it shared this vital part of the game. I was dissapointed to find that the feature was entirely removed, replaced by online multiplayer. Not surprisingly, nobody was online. The game lost a key feature, that if i knew about i would have not purchased the game. I belive split screen should be included in all games that have online multiplayer.