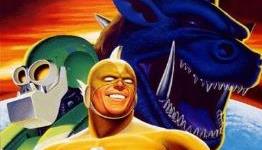 Carl Williams writes, "It is a rule of gaming, when one game is a hit, there must be a sequel to capitalize and cannabalize sales. SNK was no different in this regard as their unstopped rampage through fighting games on the Neo Geo system attested- as the system went on, fewer and fewer original games were released as sequel fever took over. King of the Monsters was popular enough to spawn one sequel, King of the Monsters 2: The Next Thing. King of the Monsters 2 was not perfect, neither was the original. What it set out to do though, it did well."

retrogamingmagazine.com
- Comments (4)+ Comments (4)
TopNewestOldest
The story is too old to be commented.

Never heard of the game. It looks similar to Rampage though.

It is a decent game, the first one is better than this sequel- not trying to take away from the fun that can be had with this one.

It is definitely worth the $5 or so to grab a copy on SNES off of Ebay.

I remember playing Neo Geo at a local arcade, they had 5 to 8 machines set up with various games, many had 3 to 4 games each. It was tough to get a machine once the fighting game craze hit because they would load at least on of the popular fighting games on each of these machines.

Collect Coins and Beat Up Baddies in Top Hunter for the Neo Geo: Today in History- May 18th, 1994