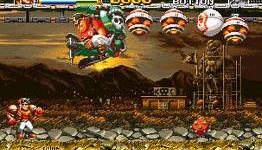 Collect Coins and Beat Up Baddies in Top Hunter for the Neo Geo: Today in History- May 18th, 1994

Carl Williams writes, "The Neo Geo was known for great arcade games that catered to many gamer tastes, at least early on. There were racing, fighting, action and adventure games available on this SNK arcade behemoth, that is before fighting games really took off. One such action game, Top Hunter, borrowed a little from the Fatal Fury fighting games and some from the Mario series from Nintendo and created a unique experience that, sadly, was only one game and not a series."

You mean yesterday in history right?

The article was written and posted on the correct date, it just took longer to get approved here on N4G. That is why I put the date in the title so people know when it is supposed to have happened.

Roddy and Cathy are sadists.