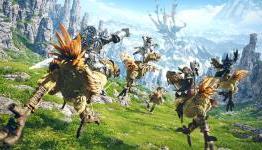 A quick history lesson. In the beginning, there was Final Fantasy XIV, an MMO of such insultingly poor quality that its players revolted and demanded more. Aside from the terrible controls and distinctly inferior storytelling, there were so many major bugs that the whole thing bordered on unplayable.

There's more than a Buried Memory to be found in Final Fantasy XIV with patch 6.2 - Entertainium

FFXIV Moonfire Faire Has Arrived, With Some Sweet Threads