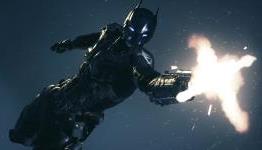 Who is the Arkham Knight? The 6 most interesting suggestions

Join games™ as we speculate on the identity of Batman’s new foe, the titular Arkham Knight.

It is Hush. It's obviously Hush. He'll take off the mask he'll look just like bruce wayne. Brice will defeat him. quit being batman and then give the suit to a kid named Terry in the next game set in the future.

Ya I highly doubt they would set up the end of Arkham City the way they did and not bring back Hush...Considering the way they left it.

i think it jason todd(red hood) but they did say arkham knight is a char that they made up thou soooo.....

the character of "Arkham Knight" may be new, but the person inside it might not be,

I have no idea who is could be. But Hush sounds the most likely. But I do love the idea of at the end it flash forwards x amount if years briefly and you see Terry ride up with the gang of jokers behind him. Bruce gets up and sees it out the window and starts heading outside. Have it lead into a Rocksteady Batman Beyond. Damn that be awesome.

It's Batman himself. He gets hit by Sacrecrow's poison and his fear of becoming an "out of control" vigilante takes over.

I swear if Joker is back from the dead and is secretly the bad guy again, it'll be super lame.

agree i am done with joker for now. i would like a backstory on joker someday but not right now.

My guess is Prometheus. They cast a similar silhouette. Prometheus' costume motif is that of a knight, So the name Arkham Knight fits. Plus, there was a Prometheus reference in Arkham Asylum, and almost everyone that was referenced in Asylum appeared in later titles. With Prometheus, Maxie Zeus, and Great white shark being among the few the haven't yet.

It's James Spader. I don't even know why but it just came to me and I am now certain enough to bet my life on it.

Whoever it is, Im looking forward for the answer

Here Are the Superhero Games You Absolutely Need to Play

The Most Evil Video Game Endings