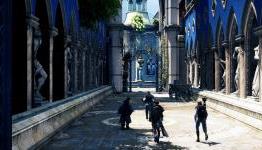 Dragon Age: Inquisition PS4 & Xbox One SKUs: We've pushed them as far as we can

BioWare talks about the differences between current and past-generation versions of Dragon Age: Inquisition as well as if they can do anything else with the game on PS4 and Xbox One.

Good. Im happy at 1080p 30fps on both xbox one and ps4. But most important a game well polished and free of bugs.

Looks like a very good looking game that also seems to have the deepest RPG gameplay in any Dragon Age to date.

I am looking forward to playing this and I don't want to read about it's story or see any gameplay footage. I am all in.

The title was misleading, and you were baited.

Though truly, he never explicitly stated anything that implied that he didn't read the article.

Now *you* may very well be correct in your assumptions. However, perhaps one could assume that you are trolling for people that don't abide by your specific internet rules.

^^I'm not implying that this is how I feel, I just hope that this may perhaps give you pause in the future.

Article doesn't mention anything about PS4 and Xbone resolution. Title is misleading. It is about last gen versions offering the same experience as next gen version.

Free of bugs? This is a Bioware game; not a Nintendo game. Bioware and Bethesda games are notoriously buggy. But, they do so much with their games that we just don't care so much.

I swore i would never buy another Bethesda game after how bad the launch of skyrim was on the PS3. I will do without and i won't bat a eye.

"Inquisition PS4 & Xbox One SKUs: We've pushed them as far as we can."

They have last gen holding back the next gen. Silly statements like these aren't right.

Ok fine they've done what they can as far cross gen development goes and making the next gen versions look as great as possible despite last gen tech and coding.

They've reached those limits but not limits of whats possible only on next gen, not even close.

If that were the case, then why does the PC look so much better than "next-Gen" consoles? The only thing holding the PS4 back is the PS4. Higher resolution textures, shadow maps, and lighting already exist in the PC version, so it is a false argument to claim PS4 is being held back by anything since it would take little to no effort to use the PC textures/etc in the PS4 version if the PS4 could handle them.

Free of bugs is a never (no games are)

but polished yes please, can't wait for this game

Can't wait for Dragon Age 4, when they "push them further than should be possible".

Lol yeah, talk about buzzwords. So many devs say this same thing every gen.

"Oh we've totally taxed [insert system here] to the fullest possible extent. There's not much more we can do."

*next game getting ready to come out*

"We're doing things we've never done before, only possible with optimization and the power of [insert system here.]"

I'm surprised the game looks as good as it does considering these consoles have only 1.84tflops and 1.25tflops of graphics processing power respectively. The problem is that all the optimization in the world wont change those numbers.
If these consoles were some radical new architecture, I would totally agree that there is plenty more untapped potential, but both of these consoles are running hardware that is almost identical to what's found in a PC... and developers have been programming for x86 for decades now. It may take a little time for developers to find each console's "sweet spot", but anyone who is expecting to see increases in graphics quality like we saw through the 6-8 years during the last generation of hardware is just not being reasonable.

All the optimizing in the world wont get past the fact that neither of these consoles will EVER have the ability to process graphics at the level of games like Metro: Last Light on PC. It's just not possible without Sony and M$ updating hardware part-way through this generation and releasing perhaps a Playstation 4.5 with a higher end GPU, where games would come with two graphics settings like we see on PC games. One setting for PS4 and one for PS4.5.

Imagine that, XB1 is getting more 1080p games. Not to say it doesn't take some work, but it looks like it is getting easier.

Release the system requirements already. I can't wait to destroy this game on highest settings.

Seriously! I can't wait to give my new card a challenge!

"We've pushed them as far as we can" said no dev ever,

These guys are so full of it, why not just say.. We've pushed our engine as far as what we could this early into the NEXT gen console life cycle?

That would make A LOT MORE SENSE!!!

What they are saying is that they are trying to squeeze every little juice out of the system as much as possible while still in the constricts of the consoles limits. that's not that hard to comprehend, every developer aims to do this.

"We've pushed them as far as WE can [before release]"

Can't wait to max this game out, looks impressive. This and the Witcher 3 will consume my social life once they come out.

Pushed them as far as we could with the current dev kits,is all that he wanted to say

people really missed the point of this article, here is a quote

expect to find different between current-gen and last-gen, in addition to specific ways they may vary the Xbox 360 and PS3 versions.

"Our goal is for there not to be any differences. We've already pushed as far as we can on the Gen 4 stuff, on Xbox One and PS4, so we're already at that point. When we look at how we bring it down to Gen 3, it's a challenge we know we have to solve and we're starting to think about it. But mostly it's going to be visual elements and immersion elements.

i could be completely wrong but it seems like they are talking about ps3 and xbox 360 that they pushed those systems as much as they could and cant go any farther.