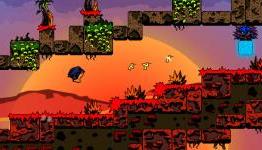 Andreas Asimakis writes, "Fenix Rage, a 2D platform game which combines Super Meat Boy, Flappy Bird and Sonic the Hedgehog into one aggravatingly addictive experience, made its debut at PAX East 2014. Judging by its influences, Fenix Rage is putting itself alongside some pretty heavy hitters. Developer Green Lava Studios (based out of the beautiful Costa Rica) certainly has its work cut out for itself if it hopes to distinguish itself from hundreds of indie platformers. Fortunately for them, Fenix Rage was all it was promised to be and more."