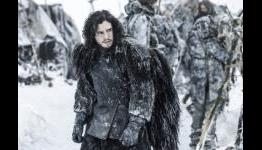 FORTUNE -- Kit Harington -- or as you probably know him, Jon Snow -- seems to be everywhere these days. He's on the big screen in Pompeii, is heard in the movie previews for How to Train Your Dragon 2 and his face is featured in the wave of advertising for the much-anticipated Season 4 of HBO's series, Game of Thrones.
Harington credits fan word-of-mouth with the series' growth in popularity " When it first came to light it was interesting that maybe only the book readers were watching, and there's a lot of them out there," he said. "Then the more they started telling their friends to watch it, the more it grew." The anticipation for season 4 has further illustrated the show's rise. "It seems like everyone has heard of it, and that's incredible to me."

The Gaming Of Thrones: Games That Add To The Lore Of Game Of Thrones

A Complete Guide to Game of Thrones Video Games