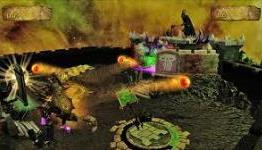 Warlords Review: Your Home is Your Castle | GamerTell

From the review, "Long, long ago on the Atari 2600 there was a game called Warlords. It took Breakout – style gameplay and added a multiplayer element. It owed a bit to Pong as well. Ah, the things Atari could do with a long blip and a couple of smaller blips back in the day. [Brian Allen] never owned it, but I am told it led to much controller throwing and damaged some friendships. This new version is the second time Warlords has received an Xbox 360 remake, and this is the second time developer Griptonite Games has released this second remake. Confused? This is the video game industry we’re talking about. Sometimes you have to just go with it.

Old School Multiplayer Games We Can't Get Enough Of