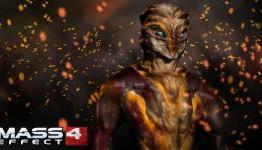 Multiple Mass Effect 4 updates coming during the next weeks

Well, it seems Bioware has finally decided to listen to the pleads of fans, and will be releasing constant devblogs over the next few weeks. It won’t be one major announcement, instead, the announcements will be spread out over time, up until March.

ME3 for the terrible ending really, something which will have to stick now with ME4 since it's going to be a part of the game worlds history "The Great Reaper War". Could of solved that if they went with the Indoctrination theory but they didn't

ME2....well the whole cool down weapons to Thermal clips despite the excuse for the change was so bad. They took a step back to an old formula instead of going forward. Your telling me a universe with cool down guns wouldn't make better guns which used a quicker cool down rate instead of going back to bullets basically.

They better go back to cool down weapons in ME4...the concept was futuristic in my opinions and added small strategy elements to battles.

I absolutely love the Mass Effect universe, ME2 is by far my favorite, have replayed it at least 10 times over the last two years. Only have to beat it on insanity and I will platinum it (working on that right now).

ME3 was a disappointment for me, just so many things I didn't like about it. Here's hoping they bring back most of what made ME1 and ME2 so fun!

The ME series to me has been the one RPG that rivaled Deus Ex: The Conspiracy, which to this day is one of my most memorable games.

The thing about ME3 was that it seemed to be a lot less 'deep' than ME2, and significantly less deep than ME1.

An example is cruising the system checking out planets. In ME1 you actually could land and drive around on those planets. ME2 you could no longer land on them (unless you found an anomaly) but you could scan each planet individually to find resources. In ME3 you just fly around doing 'pulses' in each system looking for anomaly's and then flying back out when a reaper caught your signal. It felt very cheap and tacked on IMO.

In general there was a lot of other things in ME3 that just seemed to be cheapened up from previous titles, and there was much less 'meat' on the bones.

Aside from Uncharted 3, ME3 was the only other game I have simply traded in after beating it once because I hated it so much. I always keep my games, but ME3 was an instant trade back to Amazon because I felt that even buying it for $40 it wasn't worth the price. Although I may end up buying it again real cheap so I can check out the revised ending.

Crazy thing is, I got ME2 for $15 shipped from Amazon, and each time I replay it I get at least 60+ hours of gameplay (going on 80 hours with my insanity run, and still haven't started the reaper IFF mission yet). My goodness that was a deal!

I am so excited to find out about this game. Loved the previous games in the series.

I loved ME1, liked most of ME2, returned ME3 after about 5 hours of gameplay.

I hope they bring back the excitement and "unknown" feeling of the first game.

Awesome! I can't wait to see more of the Mass Effect universe, my favourite game-universe ;)

Oh please Oh please don't keep contradicting yourself Bioware, Please so you have some sort of pulse left. Sure you ruined Dragon Age and Sure the original Mass Effect Trilogy went from thought provoking rpg to superscripted, ignore all player choice and shoot everything but please start keeping promises again. Your games use to be great and they could be once again.

I love your protests on N4G. I am sure Bioware is paying very close attention.

lol just putting out my hopes and dreams and good company can stop lying and making mediocre games. Sorry for wanting more out of company who use to make great games.

Hey N4G is a big gaming site, I'm sure one or two people from that studio look at this site.

You will never truly know.

I think I would prefer one larger trailer that reveals a lot in a big chunk as opposed to little development blogs over the course of a few weeks.

Can't wait for more ME. Absolutely loved the whole trilogy yea yea some of u over the top dramatic a holes have always something to say negatively about the game. The ending in while not good was good enuff in my mind

Can't have updates before a reveal :P

If you look at the tweets right before the one in question its clear that he was specifically talking about a Dragon Age: Inquisition dev diary and this had nothing to do with ME4