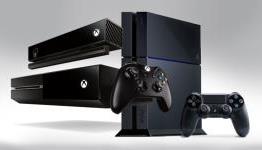 PS4 Follows Xbox One with Unofficial Price Drop in UK

Adhttps://www.youtube.com/watch?v=_iUAHlmkvuE&feature=youtu.be
- Comments (28)+ Comments (28)
TopNewestOldest
The story is too old to be commented.

ps4 ftw n e 1 who gets xbone what were u thinking?

Why does it matter what someone else gets?

A price drop already? The systems just came out!

There is no PS4 price drop.

"always been this price Euro >> GBP Dublin based shop"

It's jsut the way how things work in UK. Hardly any products stay at RRP.

Retailers are just too competitive and try to beat each other with prices. Stores like Asda (walmart) has gaming stuff cheaper then game stores.

It has nothing to do with 'retailers are just too competitive'. It is just a pricing difference between the Euro and Pound. The short neogaf thread there explains it clearly. The PS4 has always been this price.

It seems I owe you an apology, Hocking. I didn't realise it was stock sold from Ireland. Bubble to all your posts for the misunderstanding.

And guess which console outsold the other 10 to 1 since 1st January in Ireland? :)

supporting anti consumer greed/profit before anything company's that harm the industry/hobby/pastime like Microsoft does, we'll, this effects everyone..

it really does matter what someone else gets when your talking about a product like the Xbox one, coming from a company like Microsoft..

um The more people get PS4 the more rev PS4 gets and the more people to play with. I mean, what if the not known best player of a game doesn't have a PS4 yet an was on the fence until now or anytime but comments on forums and comment sections influenced them to make their decision now the best player in Killzone or another game is on your console of choice.
The moral to the story is if you play multi player getting others to play the same game on your console of choice (also if it's in their best interest)and get as many people as possible to play that's how we get sequels, that's how we get success on our platforms and franchises That's X1, PS4 and CoD, Battlefield, KZ etc. As consumers we wish success on our decisions Companies rely on some to share the good word "word of mouth" this is why one might care what console anyone buys. Hope to enlighten some. "Fanboy" (a horrible over used term might I add)or whatever you guys call them or us is a necessary entity in communities. X1 fans support your purchase if necessary PS4 fans the same. Or just COMMENT on whatever you want regardless what others want you to say in the COMMENT section.

Really sad that you get so many disagrees. Probably also shouldn't say that you want world peace.

Competition is healthy, hence why there are price drops.

@VaizardNL
He gets disagrees because people don't believe he is sincere. Cant we all just get along, aww bless so sweet.

@Pricey, he looks pretty sincere to me. Nowhere does his 'tone' imply he is being sarcastic. Same goes for Bladefist. People apparently aren't 'allowed' to buy what they prefer or want people to just get along and stop bitching, which I find really sad.

Price drops are indeed a big plus to consumers and that is why competition is great :)

When the xbox price drops a bit its all doom and gloom, when ps4 drops its all celebrations, strange fanboy website.

That what you eat don't make me Sh**

How many times is this dumb story going to keep getting posted here? There is no price cut on the PS4. It's always been this price.

Products that are completely sold out or sell out new stock immediately don't get price cuts.

How many time are you going post things without checking facts?

"always been this price Euro >> GBP Dublin based shop"

No price drop. End of story. Move on.

I think it's the difference between US and the UK. in UK we never follow the RRP. So we never give a crap if its an official RRP price drop or not. Whilst in the US they just follow the RRP.

Now this price drop is not official since Sony didn't drop it but to consumers its still cheaper.

Hocking is right and I'm wrong. It's from a Dublin based retailer.

Wow respect dude , someone is actually acting mature on the internet.

@Onenyte: The one thing I value in myself and in other people is humility so it would be completely wrong of me not to acknowledge the fact I was wrong.

"Hocking is right and I'm wrong"

and yet the sony fanboys agreed with your original comment.

further proof this site is swarming with PS fanboys.

Amazon Slashes Up To 71% Off On Several Games