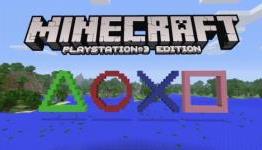 After taking time off of developing editions of Minecraft on next-generation consoles in order to focus their efforts on releasing the PS3 edition of the game late last year, 4J Studios is now back at work on versions of game on the Playstation 4 and comparing it to its PS3 counterpart.

Minecraft isn't known for its graphics so the comparison is useless.

This comparison was pretty rubbish anyway. They're not even stills it's a photo of two screens... and a slightly blurry photo as it is.

You're right because I can't figure out which is which.

I feel like the bottom is the PS4 because the colors look more vibrant, that could just be the area. Anyone know?

I actually think that Minecraft would lose part of it's charm if it had uber polished visuals, it's not meant to be pretty in that sort of way.

I can't agree with that because, I've played minecraft with realistic textures + shaders and realistic water. It is amazing with or without the visuals and wouldn't lose any piece of its charm.

Agreed Minecraft isn't bought for graphics and the reason you buy an upgraded version (e.g. PS4) is for bigger worlds not better graphics. Even so Minecraft still should be played on PC if you love the series..

The purpose of the comparison isnt to compare graphics. There's a load of objects in the ps4 screen that aren't available in the console versions.

I'm hoping its identical to the PC version and updates just as often.

Actually in terms of graphics, Minecraft can be a good benchmark.
It can be a very good game to test the render distance of your hardware.

and also the ability of the console to hold fps when you put down 100 tnt to make a crater lol , when i was using a 660ti a while back lots of tnt would lag out my game like crazy till the explosions stopped then there was just a huge hole from no where lol.

THat TNT problem is insane, me and some frineds filled this giant tower full of tnt and my screen was frozen for about 5 minutes

Sounds like something that would make the CPU bog down more than the GPU.

Thats my point its not just an indicator of graphics or anything its an overall good tester for a systems power, some ppl think because it looks basic it wont stress a system but it does , given enough tnt at once it can prob give any system a run for its money.

It would be a better test if it weren't Java-based. Java is heavier and not near as efficient as regular code.

What sinspirit said. Minecraft is like a giant tribute to object oriented Java programming. It only runs as well as it does because of its relative simplicity, but try to screw with too many objects at once and...

Not any more, my PC isn't great and I can use the farthest render distance.

Get Optifine and see how it handles 32+ chunk render distance :P Mine can barely manage it but I put it on anyway for the epic vistas :D

It runs on Java an ancient technology that benchmarks the WRONG things when you want to benchmark. It leaves valuable resources on your system begging to be used..

The performance issues with Java aren't because it's an old tech. It's because it runs a virtual machine.

I don't know why the idiots would disagree. Cross buy is a very valid point. I for one will not purchase the ps4 version because I already paid for the ps3 version.

They disagree because, while its something many have enjoyed thanks to efforts by other developers and their cross-buy games, it's not something that should be expected by any sense of the word. I'm not entitled to any new releases of a game just because I bought a former edition, even if some precedence has been established. You own the PS3 edition, which will not become useless after the PS4 edition launches.

Of course, Mojang should certainly be able to afford it, and at LEAST a discount for those who purchased the PS3 version would be a sign of good will, but it's not something they're required to do by any means.

I really hope so.

I doubt it but hopefully. And cross save and cross play or even tri buy, play etc lol
By tri I mean ps3, 4 and vita
And by cross play I mean play with your friends on ps3 or 4 or vita

Holding off buying it for PS3 because I assume it won't be, or they would confirm it by now. Why not tell people now to boost sales?

If its not cross buy with the Vita, I'll cry, then just play via remote play lol

It wasn't suppose to be a comparison. They just say that to cover what they are really showing. Both images show different new items. Lie carpet, trip wires, flower pots, quartz, ender chest, new wood type, and more.

Is there a release date for ps4 version ?

No release date has been announced yet.

No, but I'm one of the few people in existence that has yet to play Minecraft. I waited for it to come out on my PS3 then I sold my PS3 to get my PS4 right as Minecraft was coming out... Seriously unlucky.
I did get to see it on my cousins PS3 and was really impressed. So cannot wait to finally own Minecraft.

When you do get it, make sure to get up and walk around every few hours, blood clots can be a bi*ch, lol.

The best version is on PC. I seriously recommend playing this game with a mouse and keyboard.
Plus, PC version has more features like horses, new blocks, and mobs. Also, play on servers with custom plugins that lets you play mini games like PVP, racing, team deathmatch etc.

I agree with MassEffect, why don't you try the PC version? I can't really speak to the console versions quality, as I have yet to play it, but the PC version is great.

Is that a texture pack on the bottom? Also carrots and anvils aren't in the PS3/360 version, so does that make the PS4/XBONE version more like the PC version?

Id like to be able to rent servers, its the one real flaw with the console versions.

Its not about graphics it's about world sizes I would say...

The console versions all run on the same code, so I hope they take the time to improve the next-gen versions.

I dont know...I think the ps3 has the better textures this one around/ just jokes.

Pigs!........please for the love of everything holy...did anyone over at 4J Studios even think to cue up some Pink Floyd?

Really? That tweet with a 100x100 pic is supposed to be a comparison? Give me a break. This "journalism" is ridiculous...

Yeah this picture lacks any information or anything at all. Just a picture of minecraft that we don't even know which screen goes to which console. Who approved this??? Standards are going an all time low now.

It doesn't lack anything at all. Read the other tweet and it says the ps4 is at the top and ps3 is at the bottom. Plus it shows a lot of new items. That's how 4j teases us.

Brother I have no idea where you are looking at. The tweet does not say anything nor do the replies. When I click on the source.

WOW!!! I HAVE TO HAVE THE PS4 VERSION...LOL...No really Common its Minecraft. Give me a break... I am not sure what the PS4 version will offer to make it worth yet another purchase, but doubt it will be better graphics.

Agree 0Disagree 0
▼✖-+
SPAMInappropriate
Show all comments (48)
The story is too old to be commented.
40°

Dead Space Review - A Triumphant, Shining Example Of How To Remake A Survival Horror Classic - PSU