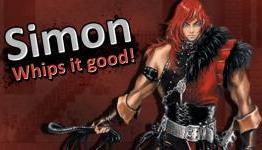 Why Simon Belmont, Ryu Hayabusa, And 8 Others Should Be In The New Smash Bros.

I know that there's no way we get all of these guys, but it would definitely help sell a ton more SSB games.

This would be so much better than seeing the same fighters over and over again.

No one should have to be convinced that the Battle Toads or Goemon would be a great addition to any fighting game.

Well Simon for sure. Mario, Sonic, Megaman, and a Belmont? That's any old school gamer's dream!

Simon but not THAT Simon. Where's the real man Simon? If you're gonna put in a Castlevania character with that more feminine style, do one that looked like that from the beginning, like Soma, or Charlotte.

Simon Belmont should be in if Snake doesn't comeback. I like both but Castlevania has so much history with Nintendo it would just make sense. Plus we would have the Captain N team back (mega man, pit, and simon)

Turok, Goemon, R. Hayabusa, and Bomberman would be AWESOME!!

The article does a good job with telling how the character can fit in the game with his fighting style but including characters in Smash Bros. is a lot more than just that, it's a lot about their history with Nintendo.

Hayabusa (if outfit is based on NES appearance) - Yes

Battletoads - Microsoft owns Rare, therefore Battletoads (and they are not doing anything with the IP but Phil Spencer might bring it back)

Crono - Maybe, he's not too symbolic with Nintendo and I often view him more a Playstation guy.

Bomberman - No, too washed up.

Goemon - He has a lot of Japan Only Games but he can still work, plus his inclusion will add western awareness so we might get some localized Goemon games on eshop.

and No to the rest

Up to 50% off first-party Nintendo 3DS games