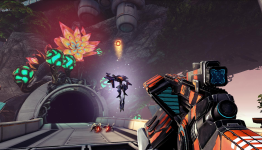 The end has finally come for the Sanctum 2 saga. In this final chapter, the war against the Lumes reaches its climax. In the last DLC, the Titan was destroyed, and the war with the alien horde seemed like it was nearly won. Or so it seemed. As this final DLC – Sanctum 2: The Last Stand – opens, the world is still under siege, and the government is poised to evacuate the planet. It’s up to our five heroes to stay the Lume tide, in order to allow everyone to escape. That means some will be left to die. Brightholme, Tsygan’s city, is left to perish in the aftermath. And in one final blaze of chaos, bullets, and fading hope, they take on the overwhelming Lume threat. However, this isn’t a battle that can be won.

Adhttps://www.releases.com/?utm_source=n4g&utm_medium=native&utm_campaign=c1
- Comments (0)+ Comments (0)
TopNewestOldest
The story is too old to be commented.
30°

Sanctum and Sanctum 2 are free this week on Steam