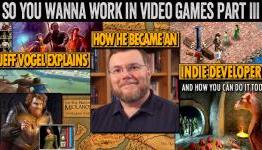 Jeff Vogel: On Becoming a Game Designer: So You Want to Work in Video Games: Hardcore Droid

Since Pong was invented in the 1970s (which was, according to Wikipedia, in the previous millennium), Jeff Vogel has been obsessed with video games. Jeff was a nerdy kid.

Vogel played them throughout his childhood. As soon as he learned to program in BASIC, he began to write games. Of course, in the beginning, they were terrible, but he was blessed with persistence and perfecting any craft takes time. He'd write a game, throw it away, then wrote another. At the time, it was just a hobby. Making it a real career never occurred to him. He followed other paths.

100 word limit, makes the title on the included image impossible to replicate here.

So, please accept the above title.