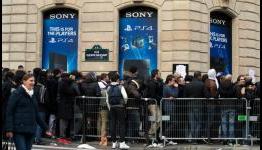 New York Times: New game consoles from Sony and Microsoft are sold out in many stores, with Sony’s less expensive PlayStation 4 proving to be especially difficult for shoppers to find. The PlayStation 4 and Xbox One had stronger sales during their first two weeks on the market — more than two million each — than any previous game console, according to DFC Intelligence, a game research firm in San Diego.

Only sony PS4 is sold out not MS xbone...Just so you know

Sony sold more, but it varies from store to store. I went to target today, so plenty of ps4s, and only one xbox, which was in the process of being sold. I went to best buy and there were only Xbox ones (like 9 of them)

Don't be such a fanboy.

At least in my area, PS4 is the harder console to find. I know the workers at all my local gamestops(there are 5) and all tend to have a steady stock of atleast 6 xb1's, while PS4 shipments sell out the morning they get them.

My local Walmart is the same.

There is a BestBuy that I don't often visit, so maybe all the PS4s are hiding there...

Honestly from my experience, PS4 is the harder console to find. Now there could be a few things causing this; it could be popularity, amount of supply and a few other factors. I have no clue which console is doing better over all, and I really don't care. I own and play both. I do prefer PS4 now, but that could change as most issues I have with XB1 could easily be changed(and hopefully will be changed)

I went to K-Mart with my sister today (she was buying a Tablet for her kid), and there were three Xbox One's in stock.
No PS4's.
The worker was literally trying to sell a mom, who came looking for a PS4, on the One as we entered the electronics area.

Stop it, seriously that's the bs I'm talking about there you sony fan boys sit their and claim like the PS4 is doing so much better when it's not(and the numbers will show it). And who the hell is it hurting if they are both doing good? You Son fan boys (I said fan boys) are truly the most disgusting and pitiful gamer on gods green earth. It's ridiculous you people just can't wish all consoles do good. What do you think the industry would be like if Sony was the only Console manufacture? Seriously I'm curious, Because a lot of you seem to think that no company deserves success in the industry but Sony.

Can't say I've seen ANYBODY say that only Sony should be successful.

But if you have no idea why some might want the XB1 to fail, it's pointless to even try having a "debate" with you.

Lots of people want to see Sony being successful, because it's clear they kept gamers in mind with the PS4. They want to see MS do poorly because they did pretty much the opposite(say what you want, but their console's overall design, and its reveal speak to their intentions quite clearly).

Sorry, but with the likes of some of the MS fanboys- and some Nintendo and PC ones, too- around here, can't see how you can claim with any sort of finality that it's the PS ones that are the worst. I mean, it wasn't the PS fanboys blowing up over Minecraft, now was it?

And, last I checked, Nintendo was still making consoles, so even IF the XB1 failed, Sony wouldn't be the only manufacturer. Rather than have Sony be all there was in the home console arena, people have suggested a return for Sega and Google's first foray, among other ideas.

Again, if you can't get that, there's no hope for you.

In australia depending where you go there will be heaps of x1's or none...gotta find the right place.

Congrats to sony and ms...... this is just the beggining

Remember all those articles that consoles are doomed, outdated and PC/mobile gaming will make consoles irrelivent by the time next gen comes... These journalists are worse than the people who predict the end of the world!

My local Wal-Mart has had ps4 I know the past week. I haven't seen the xbone since launch. I swear they have a unlimited supply in the back room. They sell out and the fill the case back up. Im tempted to snatch 2 more so my kids can have one

The headline makes no sense. Last gen consoles (PS3/360/Wii) sold nearly 300 MILLION units, so I'd hardly call the console market dead. And if it isn't dead then it can't be revived.