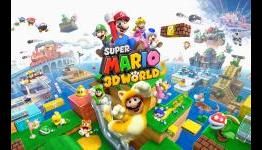 Super Mario 3D World Receives Rave Reviews Across the Board!

Here are the latest review scores for Mario 3D World:

this game is what I wish Knack would be.

the Wii U is looking more and more interesting.

@Your first statement, No one can deny that.

I don't understand. Isn't Knack supposed to be a brawler? I saw a couple videos, and it bear no similarity to Mario at all. If anything, it's more in the same vein as, say, The Wonderful 101...

now only if they had a fan base to sell them to O_O.

If this is a top selling game with a tiny user base, what's that say for the games selling on your x1 or ps4.

This game is amazing, finally the wiiu has my attention

It's a super fun family game to play with the kids. A lot of new and imaginative things in the game. It prolly wont satisfy your CoD or FPS fix, but for this genre its pretty top notch.

Well done Nintendo, still waiting for my copy to arrive but I'm sure it meets the hype!

To bad that most of us is waiting on a fairly substantial price drop.I look forward to playing when this happens.

The ps4 has sold two thirds of that in 3weeks.you don't have to speak fanboy all the time its cool to take a break every now and then and face facts.

I didn't know this article was about the sales of consoles. Who cares?

This is about a game, a game that has reviewed extremely well, not about how much consoles cost.

When you say "most of us" are you referring to your multiple personalities?

The system is already $100 cheaper than the PS4 and $200 cheaper than the X-Bone[and that's before factoring in any accessories and extra games], and on top of that there's many online retailers doing discounts this very day, not to mention year-round, to get the systems sold. On top of that, it's finally got a decent amount of worth-having games.
If your argument is "waiting for a price drop", then as far as the Wii U is concerned, if you've got the money, you're officially out of excuses.

I totally agree. Im tired of hearing it

I have the money but I won't spend more then 199usd for it.comparing it to consoles that just released prices doesn't somehow make the wiiu a steal lol.

It was too much before ps4 and x1 launched and its too much now.

And I guess a lot of us are out of excuse but the thing aint selling, I wonder why?

And b4 you say it had no games ps4 has no games either but that thing is selling like hotcakes.

PS4 and XBone aren't selling for their games; they're selling because of their specs and the so-called promises of future games being better.
They are riding their launch sales wave, just like the Wii U did.
They'll slow down, if they aren't already, so that's a moot point you've plopped down.

TBH, if you don't hate the games on the Wii U, then you're just being cheap right now.
It's worth more than 199. You're under-valuing the system.

And as to why it's not selling more units per week?
People are waiting for the next Zelda, Metroid, DKTF, and games like Bayonetta 2 from Platinum and X from Monolith Soft before investing.
They're waiting for 2014, which is when Nintendo has said they'll be focusing less on family games and more on core experiences.

im playing a file in single player and another for multiplayer. I honestly thought the multiplayer would only be a diversion or to mess about with my stepdaughter but im actually playing and taking it more seriously than single player!! "meow!!"

Currently the highest rated game of next, or now current gen.sitting with a 94 on meta and a 95 on gamerankings that probably won't change anytime soon.

Its a brilliant game. I have just over 20 hours in, and I still need to collect all the green stars, stamps, and get to the top of every flag pole, until I can unlock another world. I figure by the time I'm done with everything, I'll be around 35+ hours. Theres still multiplayer and speed runs(with ghost miis) to be enjoyed. As well as the luigi bros game.

High replay value, and the graphics(at 60fps, especially), and the music is just awesome. Oh, and of course, great gameplay, because, ITS NINTENDO.

The music is fantastic from the winter wonderland theme to the beat blocks.

Agreed. I love the Pipeline Lagoon music, especially when you're underwater, with the shimmering effects on the water. Just brilliant.

Well deserved , looks great , plays even better. One for the whole family.

I'm getting tired of people saying the system is starting to look interesting... lame. Buy the system and stop with the lame excuses on why not to buy one. There is more of a reason to buy this console over the others. I couldnt imagine a console generation without nintendo even if u have another.

My PS4 didn't arrive today, but this did. I'm OK with that.

This is just what Nintendo needed. An AMAZING game such as this one.

Working on beating every level with all 5 characters to get my last shiny white star over my profile.

Favorite song so far would have to be the Shifty Boo Manor song. Its sooooo good!

The game has a higher rating than The Last of Us. Personally, I think it deserves it. The game's critic ranking only seems to be rising.

Bought this game on launch haven't been able to play anything else since - I already have over thirty hours logged in with plenty more to go-this game is Mario perfected, and I didn't even think I was going to like it as much as Galaxy-man was I wrong!