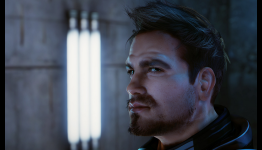 StickSkills writes, "During the 2010 Video Game Awards, fans of the Mass Effect series were treated to the announcement and reveal of Mass Effect 3. The game ultimately saw a delay, but suffered from quite the controversial ending."

It'll be CGI trailer, hence not representative at all of the final product.

@detoxx's disagreers
I don't see why not ME4 will not be extremely demanding. I am quite sure something like GTX 780Ti and many crossfire/sli setups could handle it

lol, you think bioware is going to make ME4 1440p or 4k for a handfull of pc kids. keep dreaming.

Can't wait to see what it looks like at 8K pumped straight into my optic nerve.

To be fair, honestly, while it is using the same engine, we aren't talking scale on the same level of BF4.
As long as Bioware has their head around the tech, I wouldn't be surprised if it hits 1080p and 60FPS on the PS4.

Time will tell though.

All I ask is keep the galaxy map music

lol, i though consoles players hated talking about Hi Res, oh how times have changed.

Can anybody really get involved in the story of Mass Effect after the way Mass Effect 3 ended?

Yes, this is a completely new story, new characters, just a different story in the Mass Effect Universe. ME3 ended perfectly. The whole message of the series was sacrifice for the better good. It ended the way it should. Not everything that glitters is gold.

Can I come to an article without someone bringing up resolution? Too many resolution nerds.

I know, my god, it's so annoying! This game will not run 1080p at 60fps, it's an open world RPG/shooter, get real if you think that's happening!

I cant wait to see how the story unfolds on 4.

I can't wait for the story to become a giant milked mess thanks to lead writers leaving, ME3 sucking, and EA in general.

Its hard to think of Mass Effect and any other persons face on it. Shepheeeeerd!!

As long as I get to play as FemMC then I'm happy.

Good. ME3 while not as good as the other 2 the series is still one of the best and i am looking forward to the next one in the series.

They've told their story so make a new IP. Even if its still a space game make it different and tell a different story. ME4 is lazy and frankly **** idea.
Why have gamers these days got so embedded into the big developers' way of thinking? When did we all lie down and accept the same 5/6 games being pumped out every 2/3 years (or every year with COD)? The games industry used to be full of creativity and real spark - it still exists in pockets but there's too many sequels and too few developers willing to try something new. It's not just the fault of the industry either - too many gamers look at articles like this and say "wow, brilliant" when they're going to get nothing new. Just play the first game on max difficulty if you want the same experience again.
Rant over.

P>S> if they want to remake a Space game why can't they remake Frontier, the last great space game?

VGA will rock this year.

I'm expecting either Halo 5 or Fable Heroes gameplay teaser too (or at least in engine).

Probably some Watch Dogs or Division from Ubisoft. Sony is likely to also show a bit more of Infamous to wet our appetites as well. Just saying as much as I can't wait to see new games quite a few we know about I'm expecting to see as well (Destiny is another).

VGA is when we really begin to see what is awaiting us all. Its going to be huge.

Where are people getting these images?

And on a side note, I wonder if it's gonna be that FPS that Geoff leaked photos of.

I think that got entirely cancelled.

If you're refering to the face model it's acctualy made by some random ME fan in Unreal Engine 3 ( yes thats UE3 not 4 lol ) using PC assets , hence it looks like something official from BioWare , but seeing BF4 face animation I think they can go beyond this with Frostbite or atleast be on this level

I'd like for them to mix the original Mass Effect with Freelancer and Freespace. That would be incredible.

Aww Man this gen is going to be great!

Frostbite 3 is going to look amazing with this game all those beautiful particle effects and smooth animations!

I'm expecting the new ME to be the first true next gen Frostbite experience.

BF4 isn't as bad as many of worst haters want to make it out to be but cross gen still would had held it back somewhat. Dragon Age Inquisition will likely be similar as announced for current gen as well.

My one and only concern is will I get attached to this new protagonist like shepard? I really hope so.

Looking forward to it. Its going to be a brand new character with a new story,so I expect it to be a good ride

Them saying that its looking to have a late 2014 has me think this is bull. Dragon Age Inquisition comes out late 2014, so there's no way they'll release both games at the same time.

Bioware, you have hurt me twice with Dragon Age II and Mass Effect 3. Don't make me feel those two pains with Inquisition and the next Mass Effect please!

I just hope i can fall in love again with the whole game. Man i'm gonna miss garrus, wrex and liara... and urdnot and tali and joker and E.D.I and the normandy... damn

Liara and EDI could be in it I guess if its set within 1000 years since me3.

Looking forward to a new Mass effect game, while I was hoping for more in Mass Effect 3 when compared to 1 or 2 I still believe it was enjoyably good game.

I'm here hoping that they learn and build a really strong new "mass effect 4" or w/e they're going to call it.

My brain is ready :D

Hell Yea! And I hope Micr$oft buys it exclusively too! Can't have it all PS fanboys! 🎃

I'm stoked for another mass effect but I wish they would make another Star Wars knights of the old republic miss that freaking game both were awesome during there time :(

The full version of “Lumencraft” is coming to PC via Steam on February 28th, 2023

Destiny 2 Succeeds Because The Formula Is Always Changing