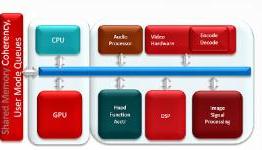 :3 do not underestimate the power of PlayStation.

interested in this one..
"Dr. Chien-Ping Lu, senior director, Mediatek USA: "How Many Cores Will We Need?""

For video games there should be no diminishing returns for added cores, within reason of course.

Video games are well suited to parallelization, if they fail to make proper use of available cores it's the developers fault. Too many developers are stuck in this single threaded mentality, it needs to be designed in from the beginning

whatever they reveal, they simply CAN´T dissapoint even if they want. after all it´s SONY. even google can´t find anything negative about PS4

Oh boy, could you imagine what the misterxmedia site is going to be like for the next 9 days?? LOL.

I thought we knew what processor it had? It says on the Sony website, or am I missing something here?

We know what it is but im guessing AMD is going to go very in depth about it.

Users lose all sense of reality, and enter another world.

Live in your world. Play in ours.

They will also reval dGPU from Volcanic Island series, MisterX thought was in the Xbone.. /s

Xbone: your sad devotion to that ancient religion has not helped you conjure up the stolen data tapes, or given you clairvoyance enough to find the rebels hidden fortres... **chokes**

PS4: I find your lack of faith disturbing....

better than whoring out your ass to microsofts huge cock.

WHAT?! Yea you Sonyboys keep worrying about CPUs that's irrelevant It's all about dat ClOuDZz

LOL if cloud was that good don't you think PC games would have taken advantage of it or do you actually think the company behind such hits as Windows Me, Vista and Windows 8 were the first to realize the potential of the cloud. If cloud was great, Google a company that knows a thing or two about such things would have made Chrome laptops with a screen a keyboard WiFi/ethernet and let cloud do the rest.

This cloud stuff is solid as an actual cloud..

@xZeratul-DTM, I figured that but I saw a chance to make a point of sumthin that I been thinking about thats why I started it out LOL :) see smiley no hate.

The xbox reveal will be running on pc in secret..

Well that shall be very interesting.

I wonder what would happen if they announced the clock speed of the CPU to be 2GHzs.

Anyways it'll be a blast to see more info on the PS4s APU.

a lot of consoles would overheat prob.

^^^ He/she is right plus look at all the ventilation on the console.

Both MS and Sony did learn though that there is now safe guards and advanced sensors in form of reducing overheating.

I rather have my ps4/xb1 "magically" turn off for a few minutes instead of having to pay for a repair.

This is Sony that we are talking about not Microsoft.

Remember all the overheating issues the 360 suffered at launch?

Here let me fix that for you! " a lot of Fanboys will overheat if true!"

"a lot of consoles would overheat prob."

that may not be the case if the 3D Stacked SOC TSV chipset it has more than capable active and passive heat dissipation.

Sony, has invested heavy into 3D stacked SOC TSV production silicon. both the PS3 and the PSVita already have the chips inside of the systems produced with such measures. This was several years of investment in the billions. over time

2 Ghz is plausible, but Jaguar as a uarch wasn't meant to clock very high like Piledriver or anything. Especially in this implementation, they went for higher parallelization while keeping a reasonable thermal envelope so the console boxes don't explode half-way through your game session.

Is that Sony secret sauce can u give us ingredients ? Is it dolmio tomato sauce , meatball , oil and onion ?

Yeah Sony have nothing to hide tech wise, my only gripe is the that the PS4 has no rear USB's and that it does not come with a free vertical stand lol.

I never got why they woudln't include rear-USB but then go on and sell dongles for Buzz and Singstar. So ugly having the cables on the front. They even had back-USB on the early-PS3-images before release...

I gotta stock up on some popcorn for November 13th cause it's going to get interesting here at n4g :-)

it will be the dark ages for n4g

Lucky Americans! Us Brits needs to wait till the 29th :'(

At least we get to see the reveiws etc before hand. Still annoying having to wait 2 extra weeks though.

Same here in Australia. Brought a few new ps3 games last night to get me through till then :p

I would surmise that's it's probably Southern-Island based with a mixture of Kaveri features, alongside a dedicated sound chip and upscaler, most likely clocked somewhere between 1.8 and 2.0Ghz. Knowing Sony and how they continuously impress me with their tech, I wouldn't be surprised if they managed to fit a 2.0 Ghz processor in that small case without overheating issues. But, that's just my guess...

Why does it have to be so far away!!

More info about the PS4's power? Interesting. Interesting indeed *strokes skin chin'.
What if they fit in a 2.0 Ghz processor... I'm phoaming at the mouth just thinking about it.
Anyway, I better prepare for the 13th and 14th.

The actual details of the PS4 processor is interesting but ultimately irrelevant. In the inability to hit 1080p 60fps in all games speak volumes. The power to push all nextgen games with ease simply isn't there. Instead what we get is just enough rendering juice to hit 1080p, but sacrifices must be made for performance.

But there is nothing stating that they are really pushing the PS4 to the point that it's simply not possible to achieve 1080p / 60fps! As we all well know developer are always saying how they are maxing out a console, then turn around later to say that they are using 40 to 50% of the power!

IMO it's far to early to believe either machine has shown a fraction of what they have to offer! And although even before the generation has even started, the 3rd party developers are already showing us some nice returns on what to expect concerning the PS4, it will ultimately come down to the talent of Sony's in-house studios/ 1st party to really push the envelope and show everybody what the PS4 is truly capable of! Just like this generation.

-Well said stuna1; great post! We have new consoles with developers learning how to use them. Most Developers ATM are cramming to bring cross gen multiplats into this first wave of games with deadlines obviously. They will only become more stunning in time especially without a new console cycle at the launch of a new generation

-History always shows that the beginning of every console cycle that there's a huge difference in gaming detail from the beginning to the end of the consoles life.

-Even into the second, third wave of games developers work their way threw the initial learning curve. Game designing optimization and coding becomes much more efficient during the consoles life span.

-Without being technical (which I am not gaming related) on the subject it is a fact, and I can see the PS4 games only to become technically better and hopefully exciting as ever with better tech.

-We will look back in the next few years and say oh my; look how much farther the games quality and experiences have become.

-Not all games are master pieces like with anything in entertainment but they sure will be pretty.

A good example of beginning vs end gen games. Look at Resistence: Fall of Man. Back when it came out it was amazing! now it looks completely outdated. MGS4-MGS5. GTAIV-GTAV.

These games became ALOT bigger and had alot more content near the end then their counterparts did in the beginning.

If clocked at 1.8 Ghz then the power of the PS4 CPU will be 100 Gflops + Compute Power equivalent to the 50% of the GPU's raw power (Ideal/Maxed out).
In other words the 90% of the power in PS4 CPU will be of Heterogeneous nature.

Seeing how Drive club AI was very aggressive on the last few game play footage gives the feeling that the PS4's CPU clock speed is somewhere between 2GHZ to 2.5 GHZ.

That may very well be true for the laptop/mobile market. But for a gaming console it can be over clocked a bit if the company wishes.

Lately Ive noticing Sony has been going above and beyond our expectation...SONY are always full of surprises.

Can't wait for the reveal!

Highest frequency in the system doesn't mean it's the CPU. It's mostly likely the GDDR5 ram. --- > http://en.wikipedia.org/wik...

If the CPU was clocked that high then the PS4 case will need to be cooler or it will run hot.

Since when does "agreesive AI" have direct correlation with the speed of the CPU?

Things like AI and physics (the "brains" or calculations of them) are run by the cpu.