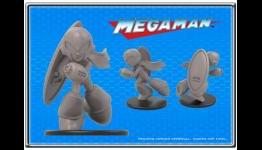 asco Games, creators of Mega Man: The Board Game and its upcoming Kickstarter have revealed the prototype for the Proto Man (sorry, there is no better way to say that) figure to be featured in the game. The developers of the game apologized for the delays in bringing the Kickstarter to life, and asked fans who they think will be in the game.

Steam Deck Review - Sets a Bar for the Switch's Successor