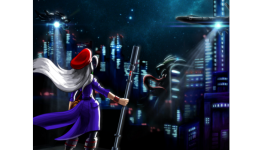 Cosmic Star Heroine, as stated at the top of Zeboyd Games’ Kickstarter page, is an upcoming turn-based RPG inspired by Chrono Trigger, Phantasy Star & Suikoden. It’s coming to PS4 as well as Vita, PC and Mac from the creators of Cthulhu Saves the World. With a goal of $100,000 and only 8 days in, Cosmic Star Heroine is nearly fully funded.

In such a short time, the game has received over $89k from nearly 4,200 backers. That is quite the feat, not a record by any means. But to those out there that have an innate hatred for indie games, believe me when I say that this is the future and you’re just missing out on the possibility for more great games in your library.

I would rather have REBORN!!!!!

You might wanna get those plums checked out, sir.

To be frank, I'd rather never refer to another man's plums.

Don't watch too much TV, no. My favorite Will Farrell movie is Stranger than Fiction.

Man the Ps4 game library is gonna be huge. It isn't the most powerful console for nothing ;-)

Do you prefer turn-based RPGs or action RPGs?

How to Get a Refund from Austrian Airlines?