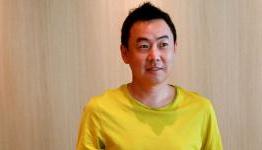 This Man Designed The PlayStation 4

Tetsu Sumii would in most circumstances be a man you'd never hear of. So it's nice that Sony have given him a shout-out on the PlayStation blog. Why? Because he designed the PlayStation 4.

Not the guts, of course, but he is the main man responsible for its appearance. You know, the box that so annoyed everyone when it didn't turn up to its own unveiling back in February.

Saying that his original idea was "totally different" to the box we've got now, he adds that the driving force behind the PS4's design was simplicty.

And this man is buying one =)

His hands were blessed by the gaming gods.

Um...guys, we knew this since E3. He was on stage and everything.

Why the disagrees? You're right.

Everytime I watch Fringe. I see a building(I think its Massive Dynamic) that looks like an PS4. It teases me >.< oh PS4 one month away.

Hmmm he should of been in conferenceses

he was on stage at E3 sony conference

Why Are Live-Service Games Failing So Badly?

Hogwarts Legacy: Cache in the Castle Quest - Where to Find the Third Landmark