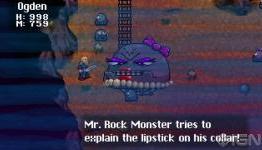 IGN - "I worry that we’re reaching a point where the identity of classic games will be defined by the remakes, mimics, and mockeries aiming to recreate their magic. Memorable Japanese roleplaying games such as Final Fantasy and Chrono Trigger were exciting because they were – and remain – special, unique, and revelatory."

Wow...that is a serious hatchet job. I played the first one, not sure what they did here...I am going to give it a whirl and craft my own opinion...but damn he sure did rip this game to shreds

i enjoyed the game with no problems.

know way i enjoyed it a great deal. 3 is way to low

I've always agreed that games like this are sold by nostalgia alone. Taken on their own merits theyre 8-16 bit, fugly, old school games just for sake of being old school. They have no pretty art and they could've been better looking but they didnt because looking retro is all they have going for it. This game may be good as its kind of a parody but I'm not interested in paying 10-15 dollars for a 20 year old "modern" game.

Same goes for Megaman 9-10. Great games just like the previous titles but I can't get over Capcom selling me a "new" 8 bit game. Why not make it look amazing? It could've been like Mighty Number 9.

Why not try to make something as good as FF6 or Chrono Trigger instead of trying to replicate it in graphics, characters, and all that shit? Radiant Historia was a great game in the same vein of Chrono Trigger and it was beautiful. They did the best with the hardware, budget, and time they had. I wouldn't mind an old school game like this if it had beautiful hand drawn sprites and detailed maps. In fact I would absolutely love it. These look like generic FF sprites made in RPG maker or something.

I don't want to sound like I'm opposed to games because of their styling or graphics because I'm not. I'm opposed to games who's only selling point is old graphics and being a knock off to a good game. Scott Pilgrim was retro and it was glorious. This team has a kick starter for new retro game that looks good from the screenshots. This game itself has some cool stuff like the giant bosses which look awesome. I just hate the goofy parody story and the art is extremely boring and generic. It has no style. The menus are basic and make FF6s look stylish. It seems to pander to nostalgic fans in a bad way. If it had some nice clean, snazzy menus, nice clean health bars, decent effects slapped over attacks, and a good storyline I would probably adore it. As it is they went basic, easy, and cheap and used retro as an excuse.