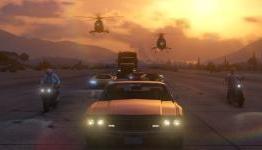 PlayStation Beat: Is Rockstar Games on to something here? Should more games lock the multiplayer for 1-2 weeks to allow you to experience the single player component in more detail? Or is this just an excuse?

I would hate it because I buy most my games just for the MP. Anyways lets say they did I would just wait until the MP unlocks go to the store and buy it used.

they had a very low % of players that finished 4 (including me).

On V it really wasn't needed, the game its self/story is strong!

I never finished 4 bcus I hated it and it was boring. I've finished over 95% of my so games all the while playing mp so I think that's a dumb excuse, ppl couldnt pry me from Tlou sp.

Setting a policy tht we get part of a game we already paid for later on is stupidity. Rockstar didn't do it bcus thy planned too, thy did it bcus online wasn't ready and this their fault.

Part of it is, a lot of people were trying MP for 2 minutes, and then never going back to it. This was by design to give more dev time to make MP as best as possible, but the distraction of MP could hinder the SP and MP, in that you would ignore one or the other never giving it a chance.

I loved what Rockstar did, it kept a game already ripe with distractions and things to do from being too overwhelming right off the bat.

To each his own. I thought 4's story was much better, especially the end. I think Rockstar just wasn't quite ready for the multiplayer to start up.

I don't think that's why R* did it. I always thought it was because they needed time to prepare everything and try to get the launch as smooth as possible.

Pure stupidity. A game should be launched when all components are ready. In no way did I agree with Rockstar making us wait for the onlineb component but I do understand things happen but this is not an innovation in how games should be launched. I see when ppl like a company they put a positive spin on anything.

Not saying i'd like it, not saying rockstar did it, but it would be an effective tool to keep people holding onto their purchases a little longer.

Or it would be an effective tool to keep people from buying it earlier.

It works for GTA, since people just want to play GTA. Though it won't work as well for Battlefield or Call of Duty.

Agreed, this would only be a good move on a game with a strong single player.

At this point, neither cod or bf should even bother with single player - personal opinion.

I think it's good in GTAV's case. Look at the problems they had with the Social Club when the game launched. It would have been a nightmare getting into a game if multiplayer launched on the 17th. They obviously didn't want to delay the game for a second time so instead they took the extra couple of weeks to make sure GTA Online had a smooth launch.

So basically we are in beta testing, Smh. That's why all developers should have beta testing to a large public this would have helped iron out the issues.

I don't think it's a good idea, since it changes little to nothing.

For games with multiplayer no one cares about (Lost Planet 3, NeverDead, Mindjack, Dead Space 2, BioShock 2, Singularity... you know, most games.), it will have absolutely no positive side effects. The people playing those games aren't looking to play multiplayer and lacking it won't get more to play single player. Actually, it might hurt these games multiplayer, since they were fairly dead ON RELEASE, so delaying it could end up with less people playing it due to resale.

The only reason this works for GTA V, is that people just want to play GTA V. Not to mention, this gives R* a chance to really market / highlight GTA Online past being a "freebie" with GTA V.

The Gooch is now live and terrorising GTA Online