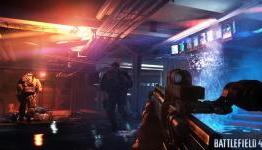 UPDATE: .gif has since been fixed and the tiered reloading animation can be seen in the post.

This is a great feature and I can't wait to try it out.

You would think since the Xbox One has the exclusive BF4 DLC content we would see more footage of that version.

Yeah I do want to see China Rising maps, but yeah they should update with some gameplay as soon as possible.

They showed SP X1 footage at E3, and they recently had playable MP at one of their X1 events. I guess no one recorded the MP and posted it.

Here is the E3 SP demo running on the X1. Notice the button prompts throughout the video.
http://www.youtube.com/watc...

That was definitely pc but using 360 controllers actually like all X1 games at e3 I think.

And you think sony had ps4 games running on retail units at E3? Of course they didn't. As a matter of fact there hasn't been any proof yet that sony has been showing off their games on anything but a devkit. Double standard FTL.

@Magoo
You are FOS.

LOL there has been no mulitplat games shown on the xbone yet not even once, they have alllllllll been pcs with better specs not even close to being dev kits. The reason for this is the fact no one can get a game to run on the piece of crap MS made well enough to show to public yet.

@Gozer did u forget the AC crush or destiny going dark

Gozer, MS had 90% of there software being ran on PC's using Nvidia GPUs, No multiplatform game shown was running on Devkits for the Xbox One. Some even crashed and shown to be windows 7 PCs. Battlefield 4 was the biggest of the offenders at E3.

Ryse and Forza and Dead Rising were the only games MS had on the show floor running off Dev Kits and it was confirmed by many journalists there.

Most multiplatform games that were shown were either demonstrated on the PC or Sony's PS4 DevKit.

Assassin's Creed, Watch_Dogs, Destiny, The Division, Dying Light, The Crew, were all running on PS4 Devkits.

MGS5 had current gen versions on show, while The Witcher 3, Battlefield 4, Need For Speed: Rivals,
Killer Instinct, Titan Fall even COD:Ghost was running on PC initially at E3.

I'm sick of comments like your, 1st off x1 games were running on windows 7 or 8 on PCs big difference from running on a Devkit and thats why people were worried. Devkit != Console Spec PCs, Devkit are the console but with extra stuff, like port or memory for editors and debug software, for development. But I don't think they will be adding memory to the devkits for X1 and PS4 now that they both are 8gb of ram, they just make a dev version of the OS to give them access to the memory as needed for adding editors and debug software on top of the game. I believe Killzone and knack was running on a real Devkit cause when they crashed at the shows they returned to the PS4 Home screen with dev info on it whereas X1 game returned to the Window 7 or 8 desktop.

so wait!! because you saw Xbox1 button prompts
make that mean it was running on xbox hardware?!

ps4 has the extra dlc as well... I have not heard of anything in bf4 being xbone exclusive.

There is a backspace key in that video.
Nice try.

It's only a timed exclusive, like the COD DLC, Xbox gets it about a month early, then PS gets it...

Where is the XB One footage?

Yes, I'm so glad they thought about that. The number of times I went for an RPG and had to watch the whole reloading animation every time I switched back to it got me killed so many times.

Man bf4 beta is right after the start of deer season here too lol. Well ill try and make time to play it but i want fresh deer meat lol.

Come on now, you've pushed it too far. The line should have been drawn at old, but you've taken it to a whole different level.

Where I come from that's fighting talk. And you're lucky I don't live there anymore.

my nan is hotter than your nan

What is tiered reloading, can someone explain?

They kinda explain it but its where it reloads from a certain point is kinda what I got from it. Hopefully someone can explain it better.

Found this in a post from user EZTiger94 on BF forums:

"basically, you know how in bf3 if you are halfway through a reload, and suddenly see another enemy so you switch to your pistol and kill him, then you switch back to your assault rifle and have to start the WHOLE reload animation again? this will be improved in battlefield 4, so it saves your reload tier if you switch to a secondary, then if you switch back it will carry on reloading from where you left off at! i have wanted this is battlefield for so long at it seems now it will be a possibility! xD"

It seems like a move to casualize the gameplay because when you take away the punishment of reload times by switching weapons: it takes away a balancing function of the heavier weapons.

Post has the .gif now where you can see it happening in real time. :D

Nice. This has to be slowest GIF ive ever seen. 1 frame a second

This is what excites shooter fans. Not a new feature or new gameplay, just reloading a gun in a slightly different manner.

Yes. Along with levolution, bringing back and improving the field upgrade system, commanders, new weapons and gadgets, essentially re-introducing classes from BF2, naval combat, dynamic and controllable events on every map, 3x the specializations available in BF3. What was it you were saying?

Nobody gives a damn about that crap. Its just another shit shooter.

Wrong millions of people care, Including myself. While the market is flooded with FPS's, Few games like Battlefield stands on the top of the pile of mundane shooters out there...

Still waiting on that Xbox game play of it running off an actual Xbox One.

Why?. If your getting the ps4, why are you waiting for Xbox footage??

I've said one day I may get an Xbox One if gets the right game, and turns gaming in a better direction. Example the only reason I bought a third Xbox after the RROD saga was a new model and the one game I couldn't get on PS3. Ikaruga. I love gaming, but I don't wanna contribute any more to MS destruction of it.

Good taste! I bought all the treasure games on XBL, guardian heroes, radiant silvergun ( which after extended play,back to back with ikaruga, I realise is the greatest shmup EVER).

You should try out sine mora.

I will pass on battlefueld 3.5

What version of the game should I get for two week early access to reloading?

Ok, cool little feature. Should be standard on all games, but is it really that big a deal?

From experience, yeah it is.