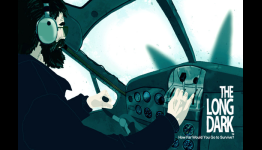 Kickstarter Pick of the Week: The Long Dark from Hinterland Games | Slimgamer

Survival games have become increasingly popular and, if you’re a fan of the genre, we have just the game for you. The Long Dark from Hinterland Games aims to do things differently as there are no hungry zombies or fearsome mutants to escape from. It’s just you against the elements.

The Long Dark has only been active on Kickstarter for a few days but has received high praise from a number of industry veterans, including Jason Kapalks, the co-founder of PopCap Games, and Ken Rolston, lead designer of Elder Scrolls: Morrowind and Oblivion. The actual team behind The Long Dark is nothing to sneeze at either considering they’ve worked on titles like Saints Row, League of Legends, Neverwinter Nights, God of War, and LA Noire to name a few.

The Long Dark: The instructions left us in the dark | Gaming Nexus

The Serene Simplicity of The Long Dark