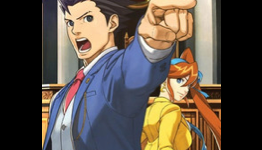 "Which do you prefer to compose, short songs or longer songs as a composer?

Iwadare: It's more work, but I prefer to compose longer songs because then I can create a drama in the music. 30 seconds is not long enough to tell a story. It's like it ends right after you say "Hey" (Laughs). It feels like I'm just repeating "hey, hey" in every short songs and sometimes that can be little frustrating as a composer."

This is why I'm not too fond of this guy. He's not supposed to "tell a story" with his tracks. They're supposed to be self-contained pieces that keeps their tempo, their tone and their hook all the way until they loop, unless it's for cutscenes or cinematic moments. I think this shows he's not fully aware of how music is supposed to compliment gameplay.

I've played the Phoenix Wright games he's composed for and it's clear to me that while they have good tunes, they often have too many tracks that vary too much considering a certain track should only make a certain atmosphere and flow for one particular moment in the game. For example when the protagonist of an Ace Attorney game corners a culprit and the track "Pursuit" plays that track is supposed to keep its momentum, and it's usually very upbeat and booming.

In the latest game that particular track has a section where it breaks down, and that's not supposed to happen.
The game drives the story forward and the music should always compliment what's happening on the screen. It does not in the latest game.

We Lowkey Had The Craziest Mobile Game Release Ever This Week