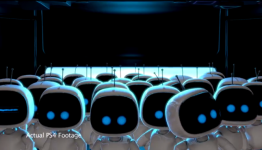 TGS: PlayStation 4’s PlayRoom is Everything I Didn’t Know I Wanted | IGN

IGN: "How this free, preloaded PS4 toy made my day at Tokyo Game Show."

Adhttps://www.youtube.com/watch?v=EjfojxXOobE&t=463s
- Comments (44)+ Comments (44)
TopNewestOldest
Expand all
The story is too old to be commented.

It's interesting that this little game/demo seems to have caught the imagination of so many people. I'm going to be interested to see what updates there are. I'm planning on buying the Camera for multiplayer and video messaging anyway, so a fun distraction like this is a bonus, especially when it's free.

Those small babyrobots should be mascots of PS4! Incredibly cute, lively and playful - just like the PS4. Greatness awaits.

"most impressive toy I’ve played with in years"

That's what she said.

They should make a "Minions" (from Despicable Me) skin for those guys. Or have a version/game using those little guys. They're hilarious, cute and my daughter freakin loves them!

Not sure why they choose to preload a camera game on a system that doesn't include a camera, that's just foolish.

Its free. So what's to complain about?

I assume the reasoning is that such games as this will create a positive word-of-mouth and entice gamers to spend a bit extra to get that camera. Since the game is free, it will surely put people who are "on the fence" towards the mentality to purchase the camera. I would prefer this path as opposed to forcing the camera on us and not including a free game, for example.

Maybe so people will see these "extras" there that will unlock a new part of your system if you just buy the needed add on. It's actually a great marketing move. Let end users see enough to make them think they are missing out on something they may actually like so that they go buy the camera.

You cannot tell me a lot of kids won't convince their parents to spring for the camera because they want to use the Playroom. It's an option with an incentive to purchase.

Better than adding a camera with the system and supplying no games that support it. ;-)

If they don't get the awareness out that a camera, a 3D camera that works with the DualShock 4 at that, is available on the system, people would think such a device ONLY EXISTS on Microsoft's console, and so consumers would flock their instead as well as MS getting all the glory. History has proven this countless times.

For example, when Sony first launched the EyeToy for the PS2, people didn't even know that this device allowed hands free gaming, as in you controlling an avatar on TV, scanning, nor did they know that it had a mic. When the PSeye launched, people didn't even know that it, too, was an enhancement of all of this. They simply thought the camera was forr video chat or that it only worked with a Move controller. So, in the end, Sony seemed more like followers with a late to no reaction.

With the PSeye 2, instead of Sony trying to outspend MS on TV or poster ads or package in a camera with every console to get the awareness out, they simply put a demo on every PS4 console to explain what the camera is capable of. Now MS has a competitor.

The more cameras Sony sell, the greater the support from devs. problem solved.

Bunding software doesn't cost Sony anything, so why not?

The only sad thing is how this perhiperal is destined to be completely underutilized. As an accessory, almost nobody will care and that is evident because Sony doesn't have anything really that supports the camera other than a demo.

Sony should have bundoed the camera in the box, because these are the things that pretty much differentiate a console from a PC, not it's gigaflops!

At least they aren't forcing you to buy a camera you probably don't want, right?

Give people that buy the camera something free to play around with?

PS3Eye gave out EyeCreate on the PS3. It wasn't a game but it did let you do some low-level camera editing.

I remember some green screen sort of thing that was possible too but I never found it or how to use it.

i would play around with this for like 5 minutes,def not worth getting a PS Eye for.

Good you have the option =)

Nice i have 10 disagrees, okay so who are the 10 people who think messing with those little robots is worth 70$?

I'd rather pay 100$ extra to not be able to play those babyrobots and watch TV instead. Oh, wait. The TV-feature won't be available at launch even though the Xbox One is presented with TV as a main selling point.

My answer to your question is: YES, I am one of those people.

I never mentioned XboxOne....i'm not comparing the value of ps eye vs kinect, i'm saying this not even a game, a 10 nibute time waster is not worth 70$ alone.

@lopez_jsue Oh i didn't know that the PlayStation Eye was exclusive hardware made only for the playroom. Ya that was silly of me to think that there would be more games and other feature for it. Ya not worth $70, if only it wasn't made only for playroom, bummmmmer :(

I actually get what you are saying, and i agree to an extent, on its own its not worth the asking price, but it is a free extra that some people will spend time on, im getting the eye so i can video chat and use the ds4s light bar to interact with my games, so to me its a bonus, think peps are being a bit hard on you here but then again its n4g.

If Sony included it in the box for $50 I would be happy in the hopes it will be utilized, instead the opted to cheap out.

Removing the camera just ensured that we will have another 7-10 years of just the same games with more pixels on screen. That is it!

I wanted a next gen console, not an upgraded pixel pusher. If I did, I would just stick with PC with easily 4 teraflops easily today!

@nuketall, i completely agree, i wish the playstation came came bundled with the system, But the current set up as it is pretty much means Dev won't use the feature in a game changing way unless sony asks them to.

It may not give Sony the 100$ advantage they want over MS but as a gamer how can you not want that?,50$ extra wouldn't be allot to pay but you would start seeing revolutionary new ways to play, Maybe Xboxone will pull it off but i honestly don't see any microsoft studios talented enough to seamlessly implement unique kinect features into a hardcore game,i may eat my words,i plan on getting a PS4 but if MS somehow makes a hardcore game that can only be done with kinect or is greatly improved with kinect(not that better with kinect BS).Then i would have to get an Xbone too.

I don't think so either, but I don't think anyone's suggesting that you should get a PS4 cam *just* for PlayRoom. It's just a tech demo, but it looks neat nonetheless, and I think I would get more than five minutes out of it, especially with my kids.

It will be interesting to see if/when they put out a specific list of the camera features and cam+DS4/Move features. They've already checked off a number of the Kinect features to some degree or another.

"It's just a tech demo, but it looks neat nonetheless, and I think I would get more than five minutes out of it, especially with my kids."

So now that Sony has a camera and showing it, it is something you would enjoy with your kids, but when MS shows it, you think it is a negative.

"In fact, I assign them negative worth... many of the Kinect features are detriments in my opinion... not only do I not want to have them, I want to not have them."

Hypocrites at it's finest!

"Some (like me) may consider that a useless or niche feature... just like I consider reading my heart rate and emotions to be worthless. In fact, I assign them negative worth... many of the Kinect features are detriments in my opinion... not only do I not want to have them, I want to not have them."

MS has explicitly stated on numerous occasions the advertising and data mining intentions of Kinect, but you go on playing the Xbot game of false equivalency and act like your selective quoting scored you points, if it makes you feel better about being made into a monitored cash cow for the company that *you already pay* to use their box/service.

can somebody tell me if i am the only what not can see the ign pages in firefox,every time what open a article in ign the page turn empty.

Same thing happens to me with Chrome.

playroom looks fun but still not getting the camera until sports champions 3 is announced lol.

I was looking forward to the camera for the interaction with the controller and the video sharing. This definitely looks like a fun little distraction and it will be interesting to see what add on content it receives.

This does look pretty cool, I like that the controller is a fun part of it.

Looks like something kids might love, so great for them. Babyrobots are pretty cute too, so yea looking good.

simple, cheap and not mandatory, the Ps4's camera is very interesting.

If Sony and Retailers was smart, they would have kiosk stands for people to try out at stores.

im buying the PS4 eye when i pick up the PS4.. not for the motion only games or anything but for the dual shock 4 capabilities, video chatting, profile pics, etc.. Social networking is going to be huge nx gen & im not interested in xb1 w kinect..

I said it once and i'll say it again, Playroom with The Minions from Despicable Me would be HILARIOUS! Bring them on Sony! :)

I don't usually like motion gaming beyond light guns, but I think multiplatform games will be made for PS4 Camera and Kinect. The key here is PS Eye being the common denominator. If the games works for PS Eye, it will probably work for Kinect and vice versa. If Multiplatform Devs are going to make a camera game, no doubt they would try to port it to PS4 as well. MS is kind of inadvertently doing all the work getting dev support for Sony as well by making Kinect mandatory. Only MS exclusives will fully utilize the advantages of Kinect, what ever that might be. We haven't seen anything special coming from MS regarding Kinect 2.0 games.

The AR bots are super cute, and can be marketed with it's own product line for the kids much like how LPB became it's own brand.

I wish Sony realized the potential. I'm not exactly getting the camera at launch because I'm strapped for cash and only have the budget for 3 games at launch and they are already preordered. But by Feb Next Year, I simply will have to get a PS®4 Eye and Second DualShock®4 controller.

Can't wait... The PS4 is just a well rounded powerful console and it's great to see the console resonate soo well with gamers and consumers alike

I am going to go on a limb before going to the link that this is a Colin Moriarity fanboy special.

Agree 0Disagree 0
▼✖-+
SPAMInappropriate
Show all comments (44)
The story is too old to be commented.
60°

PS4 Live Streams are about to get a lot more interesting

Hands-On With The PlayRoom: AR Studio