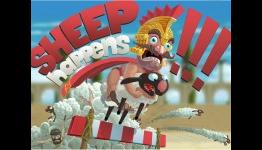 Insane game called Sheep Happens is finally out and can be run thanks to Unity3D Web player. Follow the story about unlucky Perseus - he bought some flying shoes, but the guy didn't tell him - they can't stop :) And that's not all - there's like mummies and soldiers, and obstacles down the road, including some sheep.

It goes without saying but - graphics looks awesome!