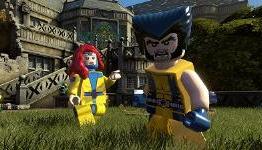 Warner Bros. Interactive Entertainment has released new screenshots of Wolverine, Jean Grey, Viper and Silver Samurai from the forthcoming LEGO Marvel Super Heroes. Wolverine, who will be playable in the game, comes to you bearing his fearsome Adamantium claws, regenerative healing and tough guy attitude all in a fun, LEGO form.

electronictheatre.co.uk
- Comments (0)+ Comments (0)
TopNewestOldest
The story is too old to be commented.
110°