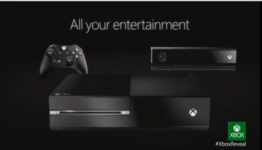 Microsoft writes: "Today at gamescom, the Xbox team confirmed over 20 game titles that are targeted to be available at the Xbox One launch. The hotly anticipated line-up of blockbuster games has been building since the initial announcement of Xbox One, with Microsoft exclusive titles receiving 272 award nominations and 111 wins at E3 2013. You can read the full line-up of currently announced Xbox One games here. And this is just the beginning - many more blockbuster games will be announced in the coming months."

Adhttps://store.steampowered.com/app/1488200/Symphony_of_War_The_Nephilim_Saga/?utm_source=n4g&utm_medium=native&utm_campaign=sow_n4g_native&utm_content=png
- Comments (170)+ Comments (170)
TopNewestOldest
Expand all
The story is too old to be commented.

Oh lord I will never forget this.

That will be his biggest regret in life.

Awesome launch lineup, throw in huge multi's like Watch Dogs, BF4 and COD Ghosts and now I have some tough decisions to make because I'm sticking to my budget of just 3 games at launch.(until after the holidays)

The XO will be breaking the hell out of my pockets.. But I'm ready.

wish I was getting a ps4 so I won't have a lot of games to buy and I can save money buying $1 $3 games.. Dam you MS for giving me a next Gen console

He was kidding! It was pretty obvious at the show. People were laughing WITH him, not AT him.

I just watched the guy at the EA conference pretty much do that.

It reminded me of when Kaz Hirai went RIIIIIIIIIIDGE RACER in attempt to woo the crowd over something so unloved.

GUESS WHAT GUYS....YOU READY!/!!?? ITS PEGGLE 2! FUCK YEAH!...Am sure the crowd clapped just to ensure there was no hilariously ensued awkward silence thereafter.

I thought it was funny. But I've played the Peggle and add-ons for the game so his over excitement made sense to me.

But for those that have never played peggle I could understand why that might have seemed excessive. But it was because it was supposed to be excessive.

I know it's socially awkward the way he did it, but it's still kind of funny that he took the time to do something like that.

I was hoping for Quantum Break, but figured it wouldn't be a launch title. If MS would have announced a $400 SKU without Kinect, and Quantum Break I may have jumped on board. Gonna wait for a price drop and Gears for now.

-They should do a VH1 Where are They Now with this guy. =]

Awesome launch lineup, throw in huge multi's like Watch Dogs, BF4 and COD Ghosts and now I have some tough decisions to make because I'm sticking to my budget of just 3 games at launch.(until after the holidays)

So, when is the XB1 releasing?

That's the lineup I'm gonna be investing in

Somebody disagrees with you... lol.

My lineup is basically identical. I'm gonna b broke.

Yes I feel MS back in the game and hopefully we all benefit. Seems they are doing the right things

It looks like they are back in the game and now I gotta work more overtime to buy at least 5 of the titles I want. DAMMM you MS. Ahhhhhgg.

Really?All those games showed where mixed in with exclusives so half of those "EXCLUSIVE GAMES" they showed after the text are not exclusive(watch dogs,fifa,assassins creed,etc.) ...seriously im amazed that anyone on here would want a xbox one over a ps4...sonys gonna rape the shit out of Microsoft no joke.

@muffins yea i doubt after that overhyped gamescom press that sony showed...look just like e3 but way more indie games...i guess those were the exclusives you guys were going on about huh...

@muffins
I'm in the market for both, that's what I meant. Now that they removed the bad and removed always on Kinect, focusing on games as top priority, I will buy one. I always buy all consoles, some at launch, some not.

The more launch games the better. Ryse, Dead Rising 3, Killer Instinct, Watch dogs or NBA 2k14 will be more than enough for launch

And then if MS follows all that up with the way they usually support their consoles.That will be it for exclusives.

My guess is that M$ support will end in 2015 sometime and X1 will become a multiplat-console like the X360 ...while PS4 will be actively supported at least a few years longer.

@Quickdraw @zod18
They dont consistently stop supporting their consoles. The original xbox had tons of great exclusives (especially console exclusives) until the 360 came out, while the 360 stopped getting a lot of exclusives around 2010. The thing is, MS didnt worry about games as much because they had a great 3rd party lineup. While the ps3 was getting inferior and delayed releases of great games like bayonetta, bioshock, lost planet, orange box amongst others, sony stepped up 1st party output after they pretty much kicked back and let 3rd parties sell the ps2 the gen before. The guy on top never tries the hardest.
The xbone will likely be behind ps4 this gen, and microsoft will definitely be releasing top notch games for the whole generation considering how many studios they bought. To suggest MS will stop support in 2015 is ridiculous, even the under supported 360 was getting steady releases 2 years in.

Concert I can only go by my past experience.PS3 was my console of choice this gen.After listening to gamers like yourself talk about all the exclusive games coming for the 360.I bought the 360,loved Mass effect then thought the world of Allan Wake then......That was it.There was nothing for me from AW till now.At least for games I like.I don't even have to buy a ps4 when it's released(even though I will).PS3 still has exclusives coming down the pipe.I think it's smart for me to wait for about 4 or 5 years in just to see how MS has supported the 1.This is just my opinion.

@quickdra
Never said there were a lot of exclusives, just that they were coming out until around 2010. But as someone who couldnt care less about FPS' and crap like killzone and gears, exclusives arent usually my selling point. But dead rising and lost odyssey are 2 worth getting, and if you dont have s good pc there are a lot of console exclusives too.
But when i dont spend 60 bucks a year on live, the fact that almost every multiplat of this gen (which was largely multiplat) runs/looks better on 360 or came out on 360 first, the 360 looks much better to me than the ps3 which i bought purely for the odd exclusive like heavy rain or TLOU.
To each his own ;)

don't you tools ever get tired of trolling xbox articles? get a life.

DID U SEE FIGHTER WITHIN SOO GOOOD

Lol i really hope that is sarcasm. I normally try to refrain from completely bashing games, but that is by far one of the lamest demos i've ever seen.

xbox one will be amazing

I see the disagrees, but hey let's give it a chance. Now, I wonder what'll Playstation announce?

I disagreed because I don't think the XBOX ONE is all that great and that is just an opinion.

I am very skeptical of MS ATM with their flip flopping trashy vision.

Again that is my opinion.

I don't really see xbox fans blowing anything out of proportion. The comments seem to recognize the games they see as good, and even point out which ones don't look good.

Some of the comments actually receive more dislikes than likes, suggesting that the "PS4 army" has already dispatched its Chaplains to silence all the non-believers for their blasphemous heresy concerning anything xbox related, and not excepting PS4 as the one, true god.

"PS4 army" has already dispatched its Chaplains to silence all the non-believers for their blasphemous heresy concerning anything xbox related, and not excepting PS4 as the one, true god"

Umm, Killer Instinct and Titan Fall are being blown out of proportion. Killer Instinct is getting all the rave even though it is not even innovative anymore. The graphics it had when it first came out where mind boggling, but now they aren't doing anything special. The game will be bought for nostalgia's sake. And Titan Fall fans act like Vanquish, Starhawk and Bulletstorm never happened

Well, Titanfall did pick up over 60 E3 awards, including Best of Show, Best Original Game, and Best Online Multiplayer. It won every category it was nominated for, breaking the record for the most amount of wins in the GCA's 16-year history for a total of 6.

See, a game doesn't need to push the boundaries of technology or even be innovative to be fun. I don't think the masses are interested in the game for it's ground-breaking innovation. They're interested because it looks fun as shit.

But all this probably means little to you, since after all, haters gonna hate...

Bubble up for being funny yet completely correct.

So my day one games will be:

Will decide later what else I want.

But I have to get Battlefield too

I will be going for the COD bundle. Im not the biggest COD fan but Ill take COD over FIFA.

EDIT: Ill pick up DR3 during Xmas.
So on day one ill have six games to play around with.

If i was getting the PS4. Id buy Killzone 3.5 and the aforementioned multiplats.

I will start with Ryse and Watchdogs, but likely pick up CoD. If BF4 has a great campaign, then might pick that up as well KI and Project Sparc is f2p so those are a huge on my list to try.

Not huge on racing, so Forza is on the fence, but it looks damn good!

Too bad about Kinect Sports Rivals delay, otherwise I would have picked that up too.

Wow what an amazing super duper exclusive line up. Ill let you decide whether im being sarcastic or not.

Based on your comment history its pretty obvious....but ok..if you say so..Watchdogs, BF4 etc..are lesser games as they are not exclusives.

I am going to be broke come November

You know Killer Instinct only has 8 characters right lol

Killer Instinct and Battlefield 4 Day One for me.

I see you troll MS articles alot, you are the joke

Wow...with a lineup like that they won't have to release another game for months...wow!!

Not until Titanfall lol

Titanfall is going to be the bomb!

Wouldn't surprise me if it is going to be like the next Halo or Cod in public acceptance. It looks just so good, but I also can't wait for Quantum Break. Damn it looks good, and from Remedy!!!

And if MS sticks to their usual MO,in about 3 yrs they won't release another game.

If Sony stuck to their "usual" their console will be hacked and be offline for over a month....