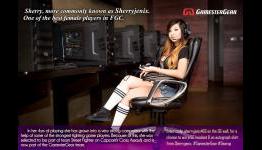 The Fighting Game Community (FGC) is getting more sponsored players. Sherry "Sherryjenix" Nhan has been sponsored by Gamester Gear! Keep the FGC growing!

Sherry is cool and all, she's been part of this for a very long time but the truth is that she's not sponsored because of her skills but because she's a girl. Because there are plenty of people that are way better than her yet they have not even a single sponsor. =/

edit: And holy crap, look at their comment section. Like half the users have either been banned or the comments deleted. lol

But it was obvious that many were going to flip out since in how many tournaments have she competed this year? In like 1 maybe 2 at most?

I am sure her gender does factor into it, but it isn't the sole factor. Ultimately, these companies sponsor people that can represent a good marketing image for them.

So if you are a hot looking woman who is really skilled at a game than yes you are likely to be singled out and sponsored because image matter. This isn't any different from when a certain guy is sponsored because he is very eloquent and approachable. Image matters and the way you interact with people matters as well.

You can be the best player in the world, but if you are an inappropriate jerk than a company isn't going to sponsor you because you are a PR nightmare waiting to happen.

Ultimately though, you still have to be incredibly skilled to get sponsored. So yes her gender and looks does factor into it, but without her skill she would not be in a position to get the sponsorship at all.

How on Earth does news like this make it onto n4g let alone approved? Some minor player gets sponsored because of her gender.. move along, nothing more to see here. She'll never break into the top 32 of a major.

N4G is an aggregate site meaning it looks for news stories that have a certain number of reads on it. So if it reaches the magical number they link to it.

Saying someone will never be able to do something is a very strong statement. From what wishingW3L was saying she doesn't do many tournaments to begin with, yet she is still considered one of the top female players.

Maybe what you say is true, but we wont know that until she starts doing more tournaments. Now that she is sponsored that is certainly going to happen. If she wants to keep her sponsorship she is going to have to be competitive with the best players. If she is constantly getting crushed than her sponsorship isn't going to be renewed. Even so, I would rather wait and see than start saying what people can never do.

I don't know who she is and have never heard her name before. Is she actually good at games or is she promoted simply because she is a woman?

Because she belongs to the penis-less gender.

who is she? what is FGC? what is Gamester Gear...and why the hell should we care??? i thought news was supposed to be relevant to...well anything. ppl saying its cause she is a attractive girl....no im sorry she isnt.

This is a case of being affiliated with actual top players and being mildy attractive. If you ever watch any FGC major stream, you are guaranteed to see Sherry hanging out with the people that make top 8. But does she get close to making top 8? Of course not... She isn't very good.

Go for Pro - Canberra Vs NorCAL