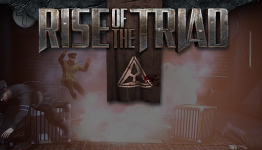 Rise of the Triad Is The Most Important Shooter Today

"There’s no denying it, there has been an unoriginal movement in the First Person Shooter category of games for a long time now. Too many games have you playing the role of a soldier, or a space marine, or some variation on that theme, running down hallways and shooting enemies in an extreme form of A to B running." - Attack On Gaming

Adhttps://www.youtube.com/watch?v=_iUAHlmkvuE&feature=youtu.be
- Comments (2)+ Comments (2)
TopNewestOldest
The story is too old to be commented.

"Too many games have you playing the role of a soldier, or a space marine, or some variation on that theme, running down hallways and shooting enemies in an extreme form of A to B running"

Everyone says this but what was the last major sci fi shooter that was AAA in scope and sales? Halo maybe? Yeah it's nice and easy to rag on games like Call of Duty while forgetting Far Cry 3 but if all we want to do is hide in nostalgia and hiss at only the BAD fps' while ignoring the glut of other titles that struggle to catch anyone's attention. Oh my God space marines suck, yes they do... we all know that. But can we stop doing this whole Daily Mail rubbish of laying claim to a whole genre because we ALL realized that the scripted linear gameplay of half life became stale over five years ago. Between here and then titles like Metro, borderlands, dead island, brink, mirror's edge, far cry, AND crysis have tried to bring some form of innovation to the experience. Frankly I don't even look at a game that isn't open world any more so can we stop whining about linear gameplay because if you're stupid enough to buy a game like... I don't know Syndicate, then you deserve a sub-par experience. Until then I'd rather play shitty but interesting games rather than become some tool whining about the glory days of Quake and Doom (forgetting masterpieces like RTCW) wishing for more (awful) reskins like Rise of the Triad or Serious Sam 3.

Doom brought a THOUSAND rip offs along with it, one of which was rise of the triads. Rise of the triads was an expansion pack to wolf 3D originally only highlighting the silliness of lambasting the modern industry for a lack of originality. I hate this silly wide eyed optimism about the past. The old days were just as full of soulless empty rip offs as well - the genre used to be called doom clones for crying out loud.

But Metro was linear, Far Cry sucks, and there was no ragging on innovative titles. Crysis, don't get me started on how atrocious that series is. Crysis 2 was pretty much Call of Duty but Sci-Fi.

There's no denying that the genre has always been kind of crappy, but in todays climate, a game with conventions from the past is completely necessary. Would you prefer more corridor shooters? How about a future of only open world clones that play exactly the same way? What if every game was like Borderlands but unbearable?

Battlefield 1 and 5 Bizarre Times Games Let Us Be Animals

GOG giving away Rise of the Triad free - 30,000 copies up for grabs