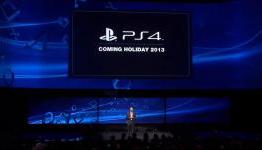 Junkie Monkeys: “Coming Holiday Season” were Sony’s words this year at E3, but a NeoGaf source says Sony might be telling…a SMALL fib.

Adhttps://store.steampowered.com/app/1488200/Symphony_of_War_The_Nephilim_Saga/?utm_source=n4g&utm_medium=native&utm_campaign=sow_n4g_native&utm_content=png
- Comments (154)+ Comments (154)
TopNewestOldest
Expand all
The story is too old to be commented.

Yes. Any day in October makes sense to me! In fact, right now would make sense! October 21st is a Monday: Do it, Sony!

The sooner the better, can't wait to get my hands on it

An August 16th release date sounds good to me.

I'm ready right now. Already have mine pre-paid and will put it to good use the minute I unbox it and power it up. The sooner the better.

October? hell yeah but here is the thing... I WANT IT NOW!!

Already placed my pre orders. I'll keep one and the other ones goes to one of you poor suckers who missed the launch edition. Gonna eBay for a small profit.

it's not gonna happen till after or on November 19. Just look @ its launch games. with watchdogs coming out on the 19th I doubt it'll be released a month earlier than their current gen counterparts.

but we can dream can't we?

I think that's quite a possibility. Sony will release before MS and the XBone releases in November.

If Sony is playing it safe it will be October for the PS4. Sure thing.

What makes me curious, though, will BF4 and CoD release on PS4 before XBone? I will laugh so hard if they do. LOL.

A 2013 Console release doesn't make sense in my opinion. Especailly with all these amazing games yet to be released. Granturismo 6,GrandtheftAuto5,Beyond Two SOuls etc...

Giving up holiday release is suicide.

There will always be good games, and developers can't change their schedule to accommodate for new systems. It's been long enough. It's time.

why does it not make sense none of those games are coming to the PS4...so I'm confused.

@HammadTheBeast
If it did launch in October that would be plenty of time for Sony to get a huge number of consoles ready for a Black Friday door buster sale. As of right now we don't know what Sony's actual expected units shipped will be and if they plan on getting additional shipments out prior to launch but before the end of the year.

As of right now it's doable and could be very successful if done right.

All of those games you mentioned would run and look so much better on ps4 so why would you wanna wait?

Take into consideration the occult, and the significance of the number 13, and it does make sense lbs.

OT: I love for this to be the date.

Buying those games on a dated PS3 when I should spending it on the PS4 is a massive waste of money.

Maybe you can do what I'm going to do...play those amazing games in my Ps3 and play other PS4 titles on my PS4. I'm keeping my other consoles so that's a no-brainer to me. What doesn't make sense???

All will be revealed next week @ GC

I would hope so unless Sony trolls us there :P

They should release on a Thursday, so that people can call off work on Friday and have a 3 day gamer's weekend.

Sounds good to me.:)

Oct 22, makes more sense though. It's a Tuesday, which is when most new games release on PS3/360. Monday can be bad for retail, since they get stuff in the week prior, with Monday's for the occosional late shipment.

Here's hoping to be at GameStop just before midnight on Oct. 21 though.:)

From what I've heard where I have mine paid off they still aren't even sure if they are going to actually have midnight launches yet....Although they better damn well do it I already have my new PSN ID ready to go I just need my damn PS4

Yeah, I haven't heard anything either. However they mentioned they had 24 pre-orders in about 2 weeks after the reveal. My store doesn't often do midnight releases though. So I have my fingers crossed.

If not no biggie. Will be there at 10am. Have two coming from Amazon as well.

thats right before my birthday which is the 22nd

OF COURSE, IT IS MY BIRTHDAY!! LOL (interesting november 17 2006 was my mother's birthday and the day my niece was born, and it was the day the PS3 was released)

October 21 makes sense to me. I can't buy it until it it available for sale. And I can't play it until I buy it.

Sooner the better I'd say .

Indeed give now I wouldn't complain

It makes a lot of sense if they can continue a steady flow to stores until Black Friday, and through out the holiday, but since I order have a day one preorder, the sooner the better

and 4 days before mine! Yes

135 days before my.... never mind.
I would like to think of it as an early Christmas gift to myself.

Perfect sense! October release date would be beautiful. I just want to unbox that bad boy and eat some pizza.

Pizza makes you laugh out loud?! :/

Lol, that too. Got Killzone, Watch Dogs, and Battlefield 4 preordered. I'll also be playing the PS+ edition of DriveClub. And DCUO most likely. I got that covered lol.

simultaneous release with AC4 and BF4 would be awesome...midnight release would be the night of the 4's

I think launching a week early would be even better, that way the systems are already on the shelves. If they launch on the same time they will all be eaten up by the preoreders. However, if everybody comes in for the launch of AC4 and BF4 and they see the PS4's on the shelves, they may go ahead and take the plunge into the next generation while they are there, since both games have been highly advertised for next gen.

Whenever Sony launches, though, they are going to want to release before the Xbox One, not only because it gives them a head start, but also because it captures alot of the market that is still on the fence. They will fulfill all of their preorders and by the time the One launches, they will have all of the retail outlets filled with them, countering the power that the One launch will have.

I doubt the PS4 will even make it to the shelves...

a man lol'ed. "The night of 4" could be a great cross company advertisement for Ubi, EA, and Sony.

I think sony execs are certain XBOX will be released in November - so getting a head start would be beneficial.

If that is true and they do sell out they best make sure that buy the time the Xbox One release they have managed to stock up the shops. A head start is beneficial but they could be ruined if they are out of stock when the One launches

You are right. Hopefully manufacturing is in overdrive right now, so their wont be to much of a wait or really bad shortages. We'll just wait and see.

On the flip side, that could increase the demand for the console. It's the usual story around console launch. You want Console X. Console X is sold out. Media scrambles to talk about Console X being sold out. Console X is now the hot, new, gotta have thing out. Plus, the majority of early adopters are core gamers. They already know what's going on and what they want. I doubt very many will be swayed in one direction or another unless the stores start saying that the next batch won't come until after the New Year or something.

It all depends I suppose, But I don't think they would have reopened preorders as many times as they have if they didn't have more than just preorders covered...I know the 3 gamestops in my area all have over 150 reservations....I just don't think MS is ready, I worked at one of them so I know the managers pretty well and they've all said GS was only given around 50 XBOs per store

Wont matter MS is gonna come out with a cheaper console by Xmas. If they get their ass kicked like most of you Sony fanboys swear, MS will release they a cheaper than PS4 SKU. OH YOU DONT THINK MS WILL 180 ON THAT. lol DEAL WITH IT!!!!

Funny that Sony will have absolutely no answer as they already ditched their camera to undercut MS. NO WAY DO SONY DO A PRICE DROP 3 WEEKS AFTER LAUNCH.

So you are saying that Sony won't drop in price 3 weeks after launch, which I guess you mean in time for Christmas... But that means PS4 release in December, which has nothing to do with this article... Also this article it pretty much saying Xbox will launch after PS4, so you said Xbox will go down in price but PS4 won't even though PS4 would be on shelves longer... Also Xbox just made Kinect not mandatory, next is just taking it out of the box to undercut PS4, and you are trying to insult PS4 for getting rid of the camera, when Xbox is about to do the same... One last thing, please learn how to type, I have been trying to make sense of your post for about 10 minutes and this is all I came up with, I don't want to waste time like that on a troll again so please do everyone a favor and think about what you are typing before you post it...

One more time in English please.

Apparently XBOX is going to do a price drop after 1 month!!!! of being on the shelves.

Xbox One makes the Wii U look good. What's your point?

Could be being that they release the PS2 in late October and PS3 in Nov. So anything is possible but it will all come down if they can meet that timeframe.

No because sony said "this holidays" and the holidays dont start until nov.

But hey sooner the better :)

"This holiday season" is typically what they say and Halloween IS technically a holiday. Not like we don't see companies pushing Xmas gifts earlier and earlier.

So "holiday" release leaves it pretty wide open for anywhere in there.

Seriously...They start pushing Christmas like the week of Halloween...Holiday season has eaten up 4 months out of the year OCT thru early Jan

Apparently, somebody has never heard of Columbus Day!

You mean that day when that Spaniard Cristoforo Colombo discovered land that had already been discovered. LOL stupidest holiday ever. They can't even spell his name right and then they say he discovered a continent where there were already people living.