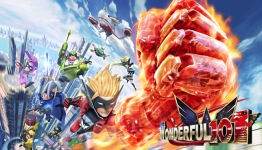 "The Wonderful 101, previously known as Project P-101, was one of those games that those interested in the Wii U have kept an eye on for a while, ever since its announcement last year. This is because it keeps viewers interested with its artstyle, motif and gameplay surrounding numerous superheroes battling aliens at once in a massive crowd. However, while it was clear that some style of combat was going on, we couldn’t really tell what was happening with the gameplay – until the most recent Nintendo Direct, which focused on explaining the gameplay of The Wonderful 101, showing a seven-minute trailer explaining more plot elements and introducing more characters."

Adhttps://www.youtube.com/watch?v=IJUbGKExS0A
- Comments (7)+ Comments (7)
TopNewestOldest
The story is too old to be commented.

It reminds me of viewtiful joe for some reason

that would explain it then lol

Great demo, I think it shows off a little bit of what the Wii U can do graphically.

I thought that the demo was very fun. It was a very chaotic game, but it was very fun. I will buy it whenever I have the time for it. But sadly it comes out during my toughest school year.

One of the few wii u games im looking for! Cant wait