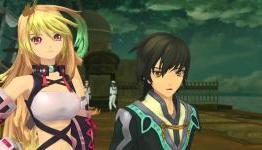 Nathan Misa of MMGN: "It’s been nearly two years since Tales of Xillia first released in Japan, and the wait for the English localisation has been almost unbearable, but Xillia is (nearly) finally here.

Xillia has received nothing but praise from our Japanese counterparts since its launch, and that only hyped me up more to play the first Tales game this generation that isn’t an enhanced port, the first to feature two unique storylines, souped-up graphics and a new third-person perspective, and the first console release to feature a collaboration between Team Symphonia (Symphonia, Abyss and Vesperia) and Team Destiny (Destiny, Rebirth and Graces).

So, is the this the best Tales game yet, as they say? In some aspects, yes, yes, yes! In others, long-time fans may find themselves surprisingly disappointed."

Adhttps://www.youtube.com/watch?v=R7HhyEZ2HRo
- Comments (6)+ Comments (6)
TopNewestOldest
The story is too old to be commented.

Rushed ending kinda worries me a bit. Though at least we know the sequel is coming to America as well. Which apparently includes everything they wanted to do with the first game, but couldn't due to time restraints.

Xillia 2 is headed here though so the ending thing shouldn't be too bad.

It felt rushed at the end, and had way less bonus stuff to do, but it's still a really awesome Tales game and solid experience that proves the series is one of the best JRPG franchises out there. The sequel apparently brings back item synthesis, more costumes and other improvements though. I'm excited for Xillia 2 now. :)

agree, i remember hearing about this way back when it was first released in japan. an people complained even when it released, we got buy the rush version before we get the better sequel.

i argued back then, it was worth it too show support for more rpg's as were sadly a niche market it seems.

Cant wait to pick this up tomorrow

Agreed I can't wait to play this game

Bandai Namco Having a Big Tales Series Sale This Weekend