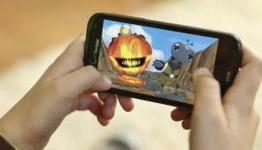 Performance is temporarily getting better, you can’t get a true feel for Mario on smartphone or tablet, and this would also lead to a decrease in brand value over the long term.

I don't see people who game on Sony hardware asking for Sony franchises to be put on smart phone. Why would people want this of Nitnendo? Wouldn't an iPhone/iPad version of Little Big Planet make money?

You can't say that here. Look, if you wanna talk about that, then meet me at the Logic and Reason Coffee House. *slips paper with address into your hands*

You didn't here notin' from me.

unless their next big hardware piece is the culmination of their successful portable skills coupled with the tablet/smartphone generation.

It may be that their games wont go to other devices but other device apps and games can come to the nintendo hardware.

Like a kindle fire...nintendo edition with full support for vc games as well as apps and media.

Why do you think Nintendo merged their home console and handheld divisions? It is my opinion that in five or six years you'll have a handheld that is also a piece of a larger scale home console. Maybe.

@AJBACK2FRAG I'm sticking with my theory that they're making a smaller gamepad like hand held that stream console games to your TV.

There is a difference though between putting LBP on a smartphone and putting a 15 year old game on a smartphone. Nintendo are potentially sitting on a huge money sack if they put the original Mario Bros on mobile devices. Hell any company should be doing this. After 15 years these games are not selling the brand anymore. Having such an old game on other devices wouldn't hurt the Nintendo brand either. I am not saying put it on the PS4/One (that is a step to far) but Android and ios.

How does the age of the franshise make a difference.

What bearing does one franchise being 5 year's old and one being 15 years old have on the future integrity of the franchise? Logically it would be wiser to put the new, less known, less available franchise on more platforms to increase its recognition. Putting something that is well known in more places makes people more tired of seeing it.

I personally don't care if any pub/dev takes their games to mobile (outside of dedicated handheld) or not, but your point about Sony on mobile doesn't really stand. Sony has PlayStation Mobile and is investing heavily in Gaikai for PS software to be on mobile devices. They want their games on phones and tablets.

Sure, I don't think phones and tablets will ever offer the experience of the dedicated handheld or console, but Sony is doing it.

Nintendo's issue is that their classics are being emulated on mobile devices and tablets. Nintendo could be selling NES, SNES, etc games on these mobile devices and making money. If people are running these emulators on phones and tablets, there is a demand, and Nintendo could be using that money from mobile sales to boost investment in Wii U, which is currently costing more and more money in R/D.

Parents often buy a game or two on mobile devices to occupy their child. If Nintendo was on mobile, more people would buy because they know the name Nintendo. All I'm saying is that us "core" gamers may not give a crap, but there is a huge market worth billions which Nintendo is missing out on.

It's true, their hardware sucks. Their games are great. So dropping Mario titles on a tablet or phone would likely depreciate their brand value.

What the hell did you just say...

My opinion is that they need their games(Mario, Zelda, etc) to sell their hardware. I think casual gamers may assume that once Mario games hit tablets, purchasing a Nintendo system would become less likely. Just my opinion is all

To play the devil's advocate, ea, capcom, square enix etc. Release some of their classics on smart phones and it didn't harm their brands that much.

You could argue that classic pokemon games would play perfectly on a touchscreen without any compromission. Still am very against abandoning the traditional buttons for touchscreens for gaming in general.

I would love to see a Advance Wars on my phone. Would work perfectly for that type of game.
I think they could test the waters with some smaller titles made for mobile with it being like a prologue for a 3DS retail game. "the story continues on" kinda thing...

i agree with nintendo it will decrease their brand value 4sur...

Their stock price would double if they did this and they would lose no value. Hardware sales might go down, but the software sales would come back in the triple making more money then the hardware sales.

Look how big the smartphone market is and throw in official Nintendo games on their digital stores and BOOM! Huge gains.

This would be my idea for Nintendo go 3rd party, but still make hardware cause people will buy your hardware no matter what cause its cheap and family friendly, you wouldn't worry about your kids breaking a 3DS, but with Galaxies and Iphones that is a different story.

Keep making hardware and go 3rd party, but give scarps like old Pokemon games and Mario as your third party support.

Slowly but surely they have turned a profit lately so I think it's safe to say they'll be alright.

I play snes and n64 games on my iPhone and I would have been happy to have got them officially. Its nice to play those games instead of hooking up my snes or n64 each time

Yup! Couldn't agree more. However, the kind of hardware you guys have put in WiiU, it is not going to "Increase or even maintain brand value"

I honestly could careless where these games go, I wish there was no exclusive games for any system. I wish they would all just work together and make a super console that could play everything but since everyone is so greedy and always has to do their own thing.

That will never happen, I love Sony's approach to all that though at least they try a little more. Providing their games on more platforms is not going to hurt anyone or their company. It will only get their games in more places, especially in places where some may not have had any interest to play Playstation games but will now, cause they had a chance to play some on other devices and may have liked them.

To me this is just the same old Nintendo, just like when they said online would never be popular or HD was not necessary. Now they are trying so hard to do both but way too late. That is the big problem with Nintendo, sometimes you need to swallow your pride and adapt to what is happening around you not constantly ignore it.

Also because Nintendo has done this, their die hard fans completely agree which is detrimental to any advancements they make because they see their fans don't care for them. When you have some Nintendo fans seriously saying things like "We don't need online multiplayer" that is just stupid. Of course it isn't needed but it sure as hell should be there for those who want to use it. I mean its 2013 and Nintendo seriously still has games using multiplayer that have no online at all, still using split screen.

Man they are stubborn. Like I said their stubborn ways show greatly in their work, that is exactly why the Wii U has barely any of those great first party titles cause Nintendo as always had to hold off so long on HD while everyone else had made the transition long before, now they are behind just like with their online infrastructure which they also thought would never be a huge thing.

Whoever is the futurist for Nintendo, he/she needs to be fired. They have predicted so many wrong things it has seriously held this company back too long.

Smart phones and tablets are selling like hot cakes no one can deny that. It would be stupid for any game company not to want their games on these things. It will make money there is no doubt about that.

Mobile gaming is a joke.

Exactly. All the more reason for companies like these to take pure advantage of that.