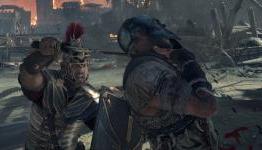 Ryse is more than just a bunch of quick-time events. But how deep will this cinematic adventure go?

Adhttps://store.steampowered.com/app/1488200/Symphony_of_War_The_Nephilim_Saga/?utm_source=n4g&utm_medium=native&utm_campaign=sow_n4g_native&utm_content=png
- Comments (11)+ Comments (11)
TopNewestOldest
Expand all
The story is too old to be commented.
demonddel3484d ago

Cerny: Why you should buy Ryse

i'm hoping kinect brings something to the table, because personally i think this looks really quite boring.. I'm not just saying that, there's other games for Xbone that i think look good.

Nope you can look it up, it was originally a kinect title for the Xbox 360. They then shelved most of the kinect active combat features for voice commands and gestures.

"During the Microsoft Press Conference at E3 2011, Ryse was announced among other Xbox 360 exclusive titles. The announcement entailed a pre-rendered trailer with minor gameplay footage.

In June 2012, Phil Spencer, corporate VP of Microsoft Studios, maintained that the game was still in development. When asked whether it was still a Kinect game, Spencer replied "Kinect will be part of the game, absolutely" leading to speculation that it was no longer a Kinect-only game, and was instead part of the "Better with Kinect" series of Xbox 360 games.

In May 2013, after the announcement of the Xbox One, Ryse was confirmed to be an exclusive for the new console. In June 2013 at the E3 Microsoft Conference, Crytek showed a gameplay video. Kinect is no longer part of the active combat but has a diminished role by providing squad commands through speech and gesture."

Oh wow I had no idea Ryse was announced in 2011 for the Xbox 360 as a kinect title. That just about killed any expectations I have for this game. No wonder it looked so linear.

Very surprised not many people are talking about this.

because it's a non-issue...

Not gonna lie, knowing it was originally announced as a Kinect title back at E3 2011 (which I knew all along) does damper any potential excitement I have for the game.

Although, them choosing to not demo it with Kinect is somewhat promising. But, we'll see. (gotta see more)

I am really confused to why this game is getting a lot of hate.

The In-Game Gold for Ryse: Son of Rome on Xbox is Free