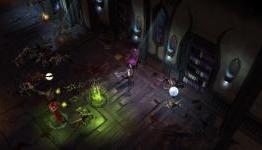 “Sony Computer Entertainment can confirm that Warrior’s Lair for PS Vita is no longer in development,” a representative told IGN. “We apologize to those who pre-ordered the title and ask that they contact their retailer directly to cancel their pre-sale.”

Previously known as Ruin, Warrior’s Lair was in development at Idol Minds in collaboration with Sony San Diego.

The representative went on to say: “The line-up of PS Vita first-party and third-party content remains strong with more than 85 titles scheduled to launch for the system by the end of 2013 including Killzone: Mercenary, Tearaway, Doki Doki Universe, Batman: Arkham Origins Blackgate, Flower, The Walking Dead, and more.”

why?! this game is almost finished! what a stupid decision
grrrr. -_-+ you better surprise me at gamescom sony, pleeeaasseee ^_^

Serious Sony!? I wanted this game! Why was it cancelled?

I hope this has nothing to do with Diablo 3 releasing on PS3 and PS4.

Wonder what's the real reason this got cancelled?

Too close to iOS/Android competitors and will be devalued?

Diablo 3 is around the corner and is PS4 Remote Play compatible?

Vaporware to cancellation.. sucks for the VITA.

How can you further delay a luanch title that turns into Vapor ware and doesn't actually have a solid release date? :/

Dang! This was one of the games that convinced me to get a Vita.

Cancelled games are fun!!! Especially when systems they're coming to have very few retail games!!!

There's so many ARPGs out there in the wild, it made no sense for Sony to make their own. Should approach Runic Games to see if they would be interested in porting over Torchlight II to the PS ecosystem. Cross-platform play between PS4, PS3, and Vita might be an enticing proposition.

only the PSVita version is cancelled. PS3 version still coming.

PlayStation Euphoria Cast: Episode 31 – How the PS4 Can Win Next Generation