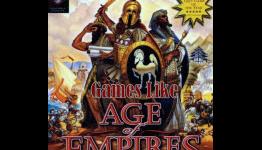 Age of Empires is a series of real-time strategy computer game developed by Ensemble Studios and published by Microsoft Studios. The games in the series focus on historical events and gives players a choice of 12 civilizations to develop from the Stone Age to the Iron Age. If you are a fan of real-time strategy games like Age of Empires then find the recommendations for it below.

AoE, AoM and EE were my go to games for the PC back in the day.

I was obsessed with RTS games. I used to play through AoE without cheats and then my next playthrough was with cheats.

AoM I got for Christmas. I actually bought the Titans expansion before I received the original game. I wasn't available in the store at the time so I just bought it before I left the store.

EE was just amazing. It took so long to get to the last epoch. I even had the expansion which added a Space Epoch. It really did take long to get to it. I actually played it last year, got my brother to play as well and it was awesome.

I actually bought Rise Of Nations 2 years ago. That game was just amazing.

I also played quite a bit of SC1 and SC2, but way after they were released.

I played Anno a lot as well. I still have Stronghold and usually play it a few times a year. I played Warcraft on the PS1. C&C was my PS1 go to game, I loved it.

Should of also mentioned another one of my favorites. Rival Realms. I only had the demo and would play it all time. I managed to buy it, but had trouble setting it up on Vista, but I did get it running. It won't run on W7... It doesn't seem like it's a popular game.

Literally my favorite gaming series ever.

I've spent more time in the map editors and random maps in that game that actually playing others.

One day we will get Age of Empires 4. And it better be worthy.

You may have already done this but in Windows 7 you can download an XP Mode to run XP Compatible apps so Rival Realms may run on that.
Or you can right click it, go to Properties, Compatibility tab, Run as Windows XP
One of those two should work

Will try XP Mode. I have tried changing the compatibility mode, but no luck.

Been playing Rome 1 and Medieval 2 a lot, but stopped recently as I don't want to get burnt out on the series before Rome 2 is released.

One thing PC does better than console, is games like Age of Empires and Rome Total war.

First RTS I ever played was Age of Empires 2 on the PC, then moved to the Total War series 2 years later.
Supreme Commander is probably second in the list of all time best RTS games, with Rome: Total War at number 1, because of it's shear scale and detail, it's a shame SupCom2 ruined that.
Can't wait for Rome 2: Total War!!!