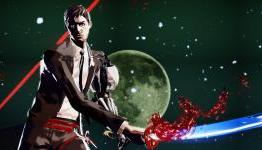 Suda 51 not bothered by Xbox One DRM

VideoGamer:"The Killer Is Dead director is instead focusing on experimenting with new engines and styles."

Of course he's not bothered about it because he's a director (whatever he is), we gamers on the other side are because DRM will make a living hell for our gaming experience.

Multiplatform developers will most likely not give a crap about used games DRM. The loss in MS game sales would go the Sony sales, therefore devs/pubs will sell exactly the same amount.

Because companies want to protect what they create, and you want copies, freebies and whatever else your cheap ass can get, you surprised about DRM?

lol he is not bothered? Of course he isn't. What a joke.

He doesn't care too busy on working on his games.

which every developer should be doing

Bring on Killer is Dead!I want japanese audio on it!

It's confirmed to have both japanese and english voices :)

As many others have said, he's making the game, not playing them.

But he should care, because if he makes games on the Xbox one, and these 'features' cause headaches for gamers who bought his game, they will take it out on him.

Anyone that releases a game on the xbox one will feel backlash over these issues.

So he's just fine being linked in with the group of morons over at microsoft?

Why is he running anything again?

I'm not really sure if these 'features' would give gamers headaches since these gamers kknow what their getting into when they bought the console.

The only way he would care is if he was creating an exclusive. Most likely he is making a multi-plat and if xbone does sell less games then those game sales would go towards the PS4.

I'm not "bothered" either, since I'm not getting the console.

But I AM affected by its implementation. And so are millions of other gamers, too. And none of it is positive.

Wow, you guys sure are spinning this one hard. If you could only see what I am seeing, you would realize how utterly insane you all look.

Who? Spinning what? With such a vague comment, you could be talking to golf analysts in Dubai.

Why care when he is probably getting one free?

The check is in the mail.

The Best Suda 51 Games So Far