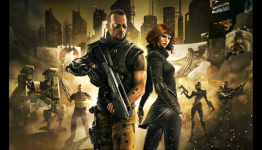 IGN: "Square Enix producer James Wright speaks the words no PC gaming purist or core console gamer wants to hear as he prepares to show me Deus Ex: The Fall: 'We’ve gone out of our way to make the game as accessible and easy to pick up as we can…as streamlined as possible.' Before we can sharpen our pitchforks and light our torches, though, we learn Wright’s not referring to the game itself, but its controls. You see, The Fall’s a mobile spin-off coming exclusively to iOS devices, and the fact many a mobile experience has been sullied by touchscreen shenanigans isn’t lost on its makers."

We only received a small amount of money to say that.

Cash-in or not, still must be played on phones. Touch screen is the worse for diverse mechanics.

Hopefully they bring it to handhelds, adapting usage of some buttons. I won't bother me much if the game retains some use of touch screen (not for moving or looking).

Deus Ex is one of the best games of this gen. Maybe they are making a new game but it's in early stage and for preserve the interest in the series Square will launch this light version. In any case good luck Square, because Deus Ex is a nice franchise

Yea so a new game funded by your hard core audience going to the mostly casual crowd is not a cash in?

I dont read alot of articles on here due to them being 1 persons opinion, and usually lame 1s at that. I read the title... and that said. I love deus ex, its better then Mass effect, even if you want to compare series to series rather then game to game, as for deus ex mobile... I find the ipad rather stupid, as well as a tablet (tho some of the microsoft 1s do look awesome) to me the ipad and tablet are technology from 2002 that never caught on til everyone had to have everything apple cause they thought it was the cool thing to do. So I will say, props to deus ex the fall... and ill be waiting for the true nex gen deus ex for now!

The Most Hardcore Android RPGs of All Time

Deus Ex: The Fall Now Available For A Reduced Price On The App Store

The Top 10 Best AAA Spin-Offs on iPad and iPhone