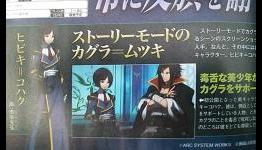 In the pages of Famitsu magazine this week, which officially hits newsstands in Japan tomorrow, Arc System Works is revealing for the PS3 version of BlazBlue: Chrono Phantasma a brand new story character (read: non-playable) who appears in the story mode scenes for actually-playable character Kagura Mutsuki.

Described as a pretty boy with a bit of a poison tongue, Hibiki Kohaku is voiced by Mitsuhiro Ichiki (Tomohiko Kazami in Another, Lias Falken in Atelier Meruru), and is an assistant of sorts to Kagura, always providing support and back-up for him from a nearby distance.

Hibiki, being the poison tongue he is, is quick to badmouth Kagura from time to time. That said, he secretly holds Kagura in nothing but the highest regard.

Although currently Hibiki has been unveiled to be nothing more than a simple story NPC – for now – one has to wonder: How long before Arc System Works turn him into a full-fledged fighter?

Adhttps://store.steampowered.com/app/1488200/Symphony_of_War_The_Nephilim_Saga/?utm_source=n4g&utm_medium=native&utm_campaign=sow_n4g_native&utm_content=png
- Comments (0)+ Comments (0)
TopNewestOldest
The story is too old to be commented.
140°6

The 11 Most Hilariously Bad Video Game Titles Of All Time