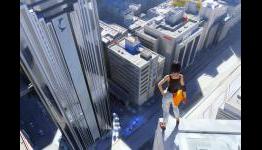 Mirror's Edge 2 for Xbox One listed also on Amazon IT

After Amazon De, Mirror's Edge 2 for Xbox One appears also on Amazon Italy. It is really an Xbox One exclusive?

It will prolly end up coming to all next ten platforms including current gen systems.

It better. I refuse to buy 1984's version of the cable box just to play Mirror's Edge 2.

i know i won't be paying 400-500 for a system just to play this one game. EA needs to pay for their tactics and the only way for this to happen is for us gamers to show them we will not take their crap.

if we can show them with low sales numbers they'll get the message.

it will come to ps3 and ps4 as well, but if it won't ( and that's almost impossible) you will be able to play it on pc like almost all xbox "exclusives"...

Anyone see the irony if it was MS exclusive- after all mirrors edge is based in a world where the state have full control and are watching everything etc :p

I plan on getting both, no fanboyism round here. ;)

I hope you're not implying my comment was made out of some sort of fanboyism, because it wasn't. I'm put off by the fact that it has so many potential privacy invasive features (mostly Kinect 2 based) and that it is likely going to send private information and/or living-room activities to MS or whoever.

Why in the hell would anyone spend millions of dollars and millions of man hours working to spy on people sat staring blankly at a screen hold a controller.Or flailing the're arms around playing Kinect.

You arent that interesting for a multibillion dollar company to spy on you.

Microsoft Boss "So what is user Fierce Musashi doing at this very moment?"

Microsoft Boss " Excellent, Are plans for WORLD DOMINATION are coming together"

Yeah, I guess you're right. Maybe I jumped the gun too soon. I shouldn't at all be alarmed at the fact that this thing has a heart-rate sensor, can read facial expression, is always listening (which could posibly hear out buzz-words) even when "turned-off", etc. which could, for all we know, be linked to accounts of the console.

Yeah, It's not like MS or anyone they are connected with is interested in anything their mass user-base is saying or doing on their services.

By the way, it's called: "Collecting Information". It doesn't matter how miniscule it may seem. If you trust it, fine by me, but not I. I will not hold it against you.

Yeah, if the PS4 comes included with the EYE.

Which it may, given the fact the move was a fail.

Yeah why would a company like EA start making exclusives.

Mirror Edge is one of the best games(IMO).
I really loved this feel, running on rooftops, sunshine, great music, world is fully white. You can´t find any game like that.

As long as EA doesn't mess this up, it'll be a day one buy on the PS4.

The rumor I heard was that it was an exclusive, and that it uses Kinect.
Edit: to clarify, I heard that on IGN's last podcast Beyond.

Can't wait for E3 and some news about ME2. One of my the most anticipated games.

EA will put this game on every system and it's mother. But an unveiling at the MS conference would raise my eyebrow I suppose.

Can you imagine if they made the protagonist in this game a male?

I think I'm going to faint; it's finally happening. Just got to say though, I'll commit the act of seppuku if it's a Xbone exclusive.

God I hope they're really making a sequel, LOVE the first. One of the few games I've held on to.

If this game is exclusive to Xbox, then it is a extra exclusive. Microsoft has publicly stated that all 15 games were coming from their in house studios and being published by them. In all honesty I do beliwve it will be exclusive or at least timed exclusive along with the next Just Cause.

No they didn't, they said after the confrence their 1st party studios were working on some great things. Never said all 15 of the exclusives were from them. Ryse for example appears to be one of these exclusives and is Kinect based i heard. Another has to be Halo 5. One is a Remedy's new game. (Didn't think they were MS 1st party? But independent?)Some will be XBLA titles or whatever MS call it for the one I'm sure, Gears of war, that other exclusive epic were making for xbox that went quiet? That's probably one, if they are counting that as a New IP or not is anyones guess. Rumour I heard was that insomniac had been paid to make an exclusive- (if that's true it's a slap in the face to sony and fans of insomniac-going multiplatform is fair enough but going exclusive to the other console is probably going to piss fans off-I'd take this with a bucket of salt though) and whatever still remains I don't have a clue what they will be-how many will also release on PC? Most of them I'd assume as otherwise MS will lose all their share in PC gaming come steambox's release. Still be buying a PS4 first/possibly only one I do get. Probably just build a gaming PC in a year or two :p Still I'll be interested to see what MS pull out of their hat.

During the reveal they said the 15 games were from their first parties. In theory that means Ryse and Quantum Break will NOT be counted in these 15 but you never really know with Microsoft.

Phil Spencer said at the reveal "we have never had as many games in development internally as we have at this point and in the first year of X1, we will be releasing 15 games, 8 of which are new IP"

Why should I have to prove that with a source or youtube video when basically everybody on N4G knows that's what he said. That's like me asking you for a link to prove the PS4 was revealed. If you really missed such a statement, then find it yourself.

Are Ryse or QB counted in those 15? Like I said in my original post, they shouldn't "in theory" do so because they are in fact, third party games although the fact they are published by MGS could indicate some spin hence my comment "you never know with MS". I was never passing off what I said as a fact, just speculating based on an observation.

As for Mirror's Edge 2, even if it were exclusive which I highly doubt, there's no way EA would hand a dice developed IP to MS, so I really don't see this being one of the 15.

The fact that the original didn't sell as well as expected, I cant see this being exclusive to any platform.

Wow there making a number 2!? When number 1 was so crap!?

1 bubble for a reason.. too bad i can't take you that one as well..

So because YOU didn't like it, they shouldn't make a second for EVERYONE ELSE that does? Unless you're heavier than the Earth, take note that the world doesn't revolve around you.

Not a fan of the series, but its quite interesting, I really doubt this game alone will change peoples minds about buying the console or not, now if the next mass effect or even the next dragon age were exclusives then that would be another thing.

I really see this game as a good way to get the hardcore crowd to back kinect, so if it is exclusive expect it developed with kinect in mind.

ME2 with kinect would be an enormous disappointment for me..i loved the first one..
anyway i don't tink DICE would go with kinect lol

But regardless it really is a chance to prove what the next kinect is about, and also when was the last MS game that didn't involve kinect somehow?.

Killzone, Destiny, Infamous, Drive Club and Battlefield will keep me too busy at PS4. I'll pass from the next Mirror's edge 2, because its first part was bad.

Looking back to the failed parkour of 2016's Mirror's Edge Catalyst