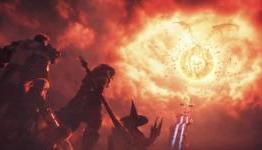 Before Meteor: Final Fantasy XIV Original Soundtrack Will Bring Back the Music of the Original FFXIV

Many agreed that the soundtrack of the original Final Fantasy XIV was one of the best parts of the game, especially due to the inspired scoring by the popular composer Nobuo Uematsu. Most of those tunes are gone as the musical score has been completely redone for Final Fantasy XIV: A Realm Reborn, even if we recently learned that Uematsu-sensei will make a comeback in the new game.

Those that loved the music of the original game still have something to look forward to, as Square Enix will release a music blu-ray titled Before Meteor: Final Fantasy XIV Original Soundtrack.

You can't go wrong with Nobuo Uematsu. I love his music in general besides just his work with games.

I love his work too, though I have to say that on FFXIV Soken and the others at the very least matched his quality. They did a great job, so I'm happy to see their tracks are included too.