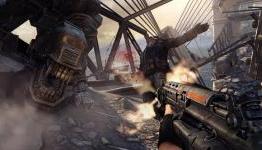 Wolfenstein: The New Order brings back B.J. Blazkowicz for another round of Nazi killing. Developer MachineGames tries to modernize the franchise by adding depth to its characters and writing, but it doesn't quite fit with the campy, arcade-style tenants that are core to the series. While the attempt is admirable, Wolfenstein fans will be more interested in the energetic action the series is known for, and the demo we saw has that down quite nicely.

In this incarnation, B.J. Blazkowicz faces an alternate reality in the 1960s where the Germans won World War 2 with some new, mysterious technology. He has come out of a coma after 14 years and must come to grips with this new world order. Creative director Jens Matthies said one of the goals for the game was to develop some drama within the story and give the player a reason to care about the characters.

Here are the new Xbox Game Pass Quests for September 2022

Wolfenstein: The New Order is free at Epic Games Store