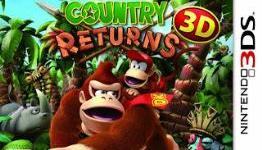 "Grab your rocket barrels and get ready to go bananas! In 2010 the original Donkey Kong Country Returns released on the Nintendo Wii. The game was made by the same developer that worked on all three Metroid Prime games, Austin, Texas-based Retro Studios. The game received high praise across the board from multiple media outlets, and even SuperPhillip Central gave it a golden score. Now it is three years later and Nintendo has opted to task Monster Games with porting the Wii game to the Nintendo 3DS in the form of Donkey Kong Country Returns 3D. Is a return to the DK Isle something recommended?"

Adhttps://store.steampowered.com/app/1488200/Symphony_of_War_The_Nephilim_Saga/?utm_source=n4g&utm_medium=native&utm_campaign=sow_n4g_native&utm_content=png
- Comments (0)+ Comments (0)
TopNewestOldest
The story is too old to be commented.
100°3

Donkey Kong Country Returns 3D is on sale for $12